This story was featured in the Winter 2011 of Hindsight alumni magazine. A video of him is featured on The Clarion-Ledger website as part of a D-Day tribute. http://www.clarionledger.com/videos/news/2014/06/05/10025015/…
By: Cathy Hayden 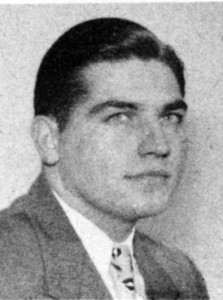 This story was featured in the Winter 2011 of Hindsight alumni magazine. A video of him is featured on The Clarion-Ledger website as part of a D-Day tribute.

Clarence Earl Derrington Jr.’s (1947) freshman class photo in the 1947 Hinds Junior College Eagle yearbook shows a serious-looking young man dressed like all the other guys in a suit and tie. At that moment, Earl “Bulldog” Derrington could have been thinking about how fortunate he was to be alive and home again to enroll in classes at his local college.

“There is no way for me to tell you what a great school Hinds was in that day and time,” Derrington recalled during his first visit since he left the Raymond Campus. “As far as I was concerned, it was all a pleasure. I was so thrilled to be here. It was special.”

World War II had been raging in Europe since 1939 by the time an 18-year-old Derrington was drafted into the U.S. Army in 1943, causing him to leave Central High School in Jackson without a diploma. He served in the Army, reaching the rank of corporal by the end of his service.

His fellow soldiers tagged him with the nickname Bulldog, which stuck with him for years, because during training exercises he refused to let anybody else get the best of him.

During a significant portion of his enlistment, Derrington was a prisoner of war. In December 1944 at the age of 20, he took a mortar round in the back during the Battle of the Bulge in Belgium. The next day he was captured and held at Stalag 69 in Germany before finally being released at the war’s end in 1945.

Like many other G.I.’s, he returned home to heal from the physical injuries he received during and after his capture – and to use his new government benefits to enroll in college.

“I was in the first group of veterans to come to Hinds Junior College after World War II,” Derrington said. “A bunch of us guys came in here. They were trying to figure out what to do with us. We were much older, much tougher and rougher. We had experienced a lot that the kids at that time hadn’t.”

Then-Registrar Mildred Herrin insisted the guys drafted out of high school finish and get a diploma. “She put us guys in high school and in junior college at the same time. She was determined we were going to finish high school,” Derrington said.

Biology instructor T.T. Beemon was another who took a special interest in the returning veterans like Derrington. “We were his first challenge,” he said.

Derrington left Hinds after a year and finished his marketing degree at the University of Southern Mississippi in Hattiesburg. He handled commercial real estate in Jackson and became instrumental in veterans affairs on a national level. He is married to Pauline, his wife of 61 years. Their son Clarence Earl Derrington III, known as Chip, attended Hinds in 1979.

In February 2011, U.S. Rep. Gregg Harper of Pearl presented Derrington with a long overdue Bronze Star medal, the fourth-highest combat decoration awarded by the U.S. military. He also received a Combat Infantry Badge that went missing in 1945 as he recovered from his wounds.

Earl and Pauline Derrington were on the Raymond Campus in October 2011, attending the football game against Jones County Junior College where Pauline Derrington’s nephew is the band director. “The amazing part to me is the change in the campus,” he said. “This campus is massive compared to that day and age. It was a great school then, and it’s still a great school.”