Vicksburg MI-BEST student shows the way to success with GED

A 35-year-old student at the Vicksburg-Warren Campus has become the first Hinds Community College MI-BEST student to receive his GED while climbing to the halfway mark in his plight to…
By: Cathy Hayden 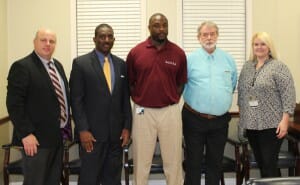 A 35-year-old student at the Vicksburg-Warren Campus has become the first Hinds Community College MI-BEST student to receive his GED while climbing to the halfway mark in his plight to receive a college career certificate.

“Finally, I have no plans but succeeding in school,” said Allen Warner, who quit high school in Saginaw, Mich., nearly two decades ago.

“There just wasn’t anything in high school that interested me, so I just didn’t do what I needed to do,” Warner said. “By the time I realized there was a program that might help me, a technical skills program, it was too late. I had messed up, and it was too late, so I just quit.”

That quitter attitude cannot be found today in the father of two girls, ages 7 and 8, and he says it will not come back, even after he finally gets “the piece of paper” that shows he’s qualified to seek and hold his dream career.

“Oh, I spent time as a dishwasher, a cook’s helper, roofer, I did some water-well drilling, I did some landscaping and some carpentry,” he said. “I was the jack of all trades and the master of none.”

“I could tell you I had done all those things, but I had no proof – no certificate,” he said. “Soon I’ll have that certificate.”

Warner said the turning point in his choices came when he was turned down for a job because he did not have his GED, or General Education Development high school equivalency certificate, and he did not want his little girls to graduate before he did.

He enrolled in the Hinds GED program during the spring semester, passing the qualifications for and fitting the criteria to have his tuition and fees paid through a grant from the Central Mississippi Planning and Development District (CMPDD). The grant was extended to MI-BEST, which stands for Mississippi Integrated-Basic Education Skills Training, last year for the current fiscal year.

Lauren Powers, Vicksburg Hinds’ navigator for the MI-BEST program and Adult Basic Education, said Warner is a prime example of what the MI-BEST and the CMPDD grant can do for other students.

A career fair for the 25 students currently enrolled in MI-BEST will be May 10 on the Vicksburg campus, Powers said. They will be given the chance to speak with representatives of local industries and possibly be interviewed for current or upcoming job openings.”

“We’re hoping the students will have the opportunity to meet these people and focus on seeking specific careers, and maybe even have a chance to be offered jobs,” she said.

At the end of the current semester, next month, Warner will be halfway through his college course load to receive his career certificate in welding.

Warner’s goal is to find a welding job that allows him a career in which he can earn a sustainable wage. He said he has not decided if he will seek the additional 15 hours of college credit to receive his technical certificate or the 15 more for his associate’s degree, “because it all depends on jobs and opportunities.”

Warren County Supervisor Charles Selmon is the workforce development Chairman on the CMPDD Board and invited Warner to address a meeting of the South Central Workforce Development Group at Hinds Vicksburg at the board’s next meeting.

Selmon said the program is allowing students such as Warner to not only get a GED, but also be trained in a specific trade that makes them marketable and ready when a new industry decides to come to Mississippi.

“I’m so excited about this young man,” Selmon said. “He is the model story, a person with a great attitude who is able to communicate with people and, best of all, he’s so humble.”

“He just got tired of being sick and tired and decided to do something about it,” Selmon said. “He is an inspiration to me. He motivates me.”

Selmon explained that workforce development programs in the state are funded through a $5 million federal fund that is facilitated by the state.

“We’re trying to increase the ready workforce in the state,” the supervisor said. “Hinds is doing a great job of helping these people get their GEDs and then training them to go to work. That helps the state attract more businesses.”