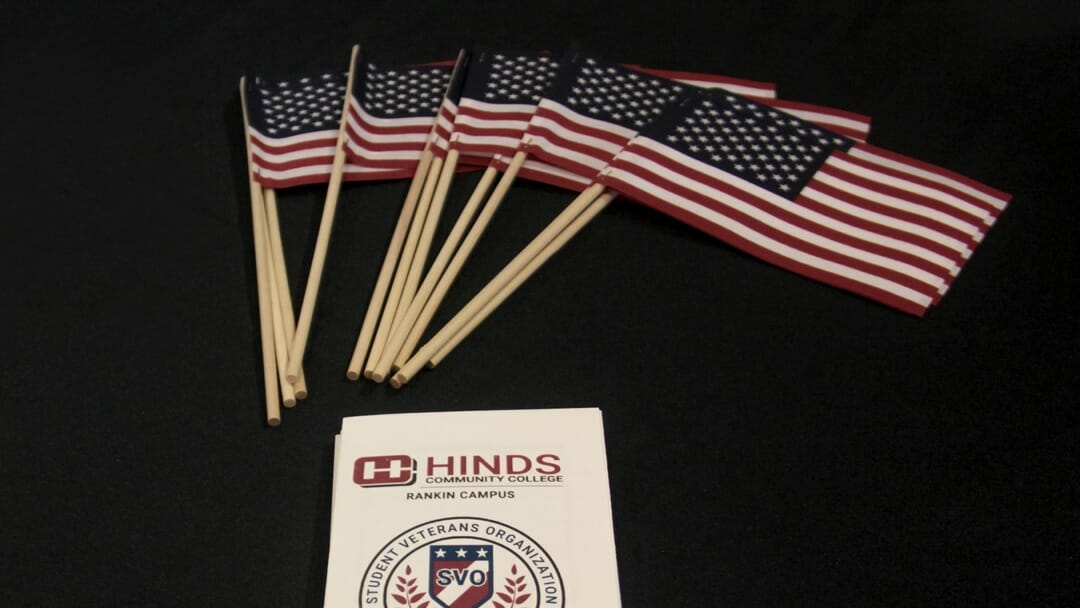 Honoring those who served and continue to serve was at the heart of Veterans Day recognition activities at Hinds this year.

At the Rankin Campus, students wrote thank-you cards to deployed service members and donated to organizations that support homeless veterans. The effort was organized by the Student Veterans Organization on campus. 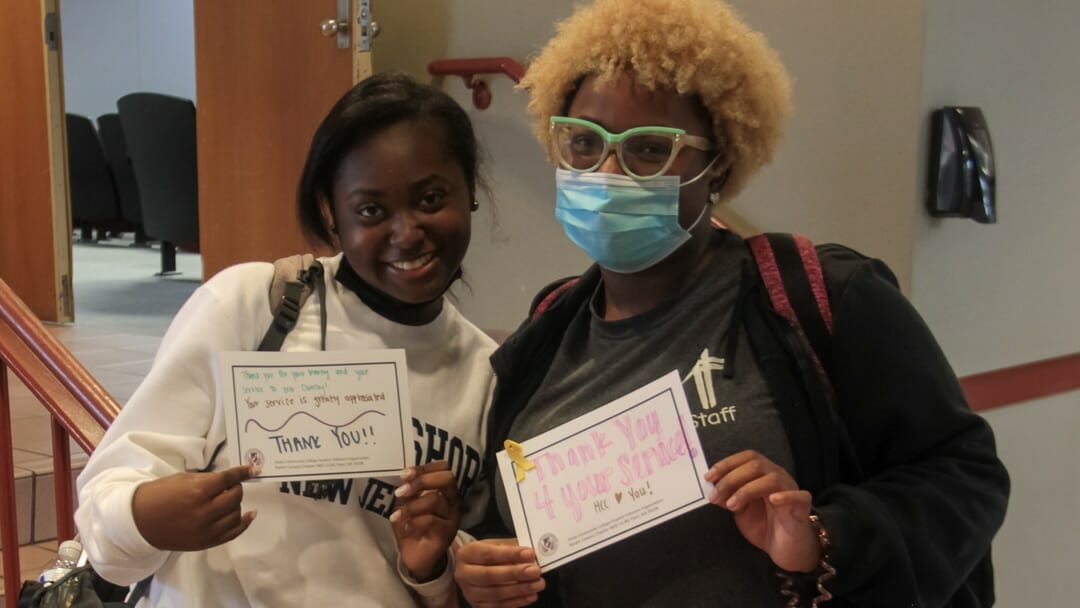 Niya Love, left, of Brandon, and Arriyana Humphrey, of Pearl, show the thank-you cards they wrote to service members serving overseas as part of Veterans Day activities at the Rankin Campus.

“The SVO officers and members brought a lot of enthusiasm to the project and so we had great participation, raising over $100 for homeless veterans,” said Dr. Kim Steil, sociology instructor and faculty advisor for the SVO.

Cards were to be sent overseas during the Thanksgiving and Christmas holidays.

“I personally know how much it means to receive mail during the holidays when you are deployed,” said David Stingley, faculty co-advisor for the SVO. It is especially heartening for people who don’t have any family to know that people care and are thinking about you.” 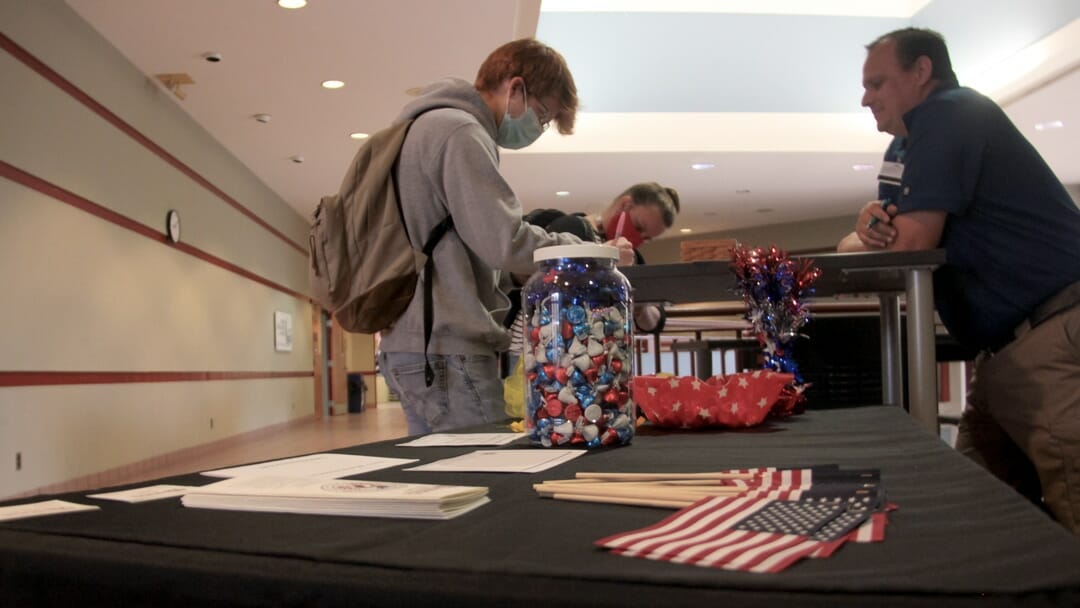 Michael Case, left of Flowood, and Allison Rogers, center, of Brandon, fill out thank-you cards to service members as part of Veterans Day activities on the Rankin Campus. At right is David Stingley, maintenance leader and a faculty advisor in the Student Veterans Organization.

At the Jackson Campus-Academic/Technical Center, a program was held by Student Services and featured CS1 Daniel S. Ellis of the U.S. Coast Guard for the keynote address. 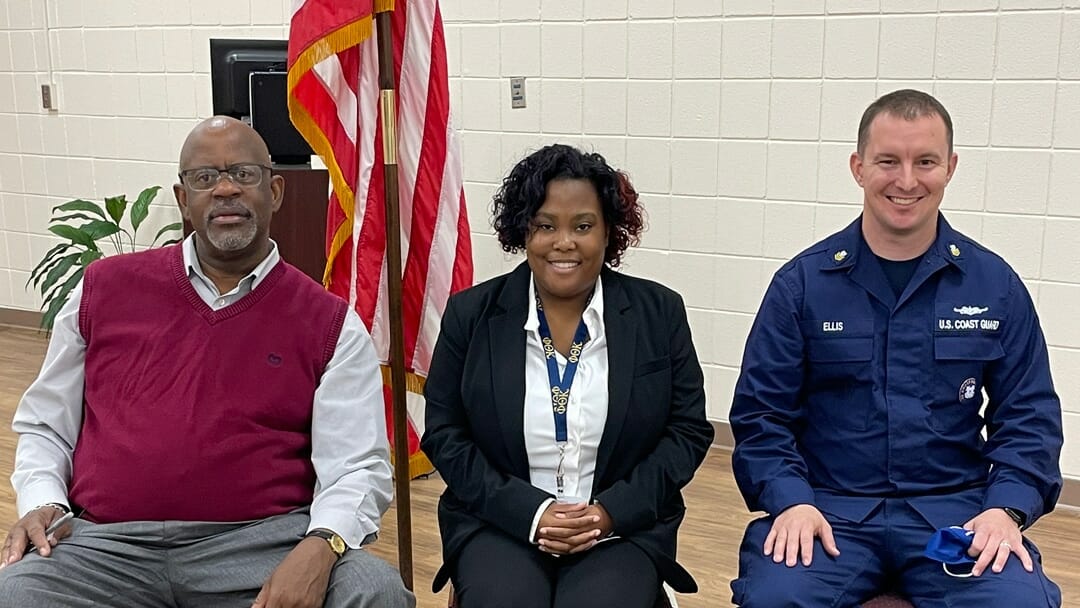 “We honored the veterans who selflessly protect our freedom,” said Dr. Aleisha Escobedo, director of the Minority Male Initiative (M2M). “We also prayed for veterans whom we have lost.”

Hinds Office of Veterans Services partnered with The Raymond Venue to host a special Veterans Day program. It brought together those who served in various branches of the military and featured a vocal performance by members of First Baptist Church of Raymond, who performed a Salute to the Armed Forces, a medley of the official marches of each branch of service. 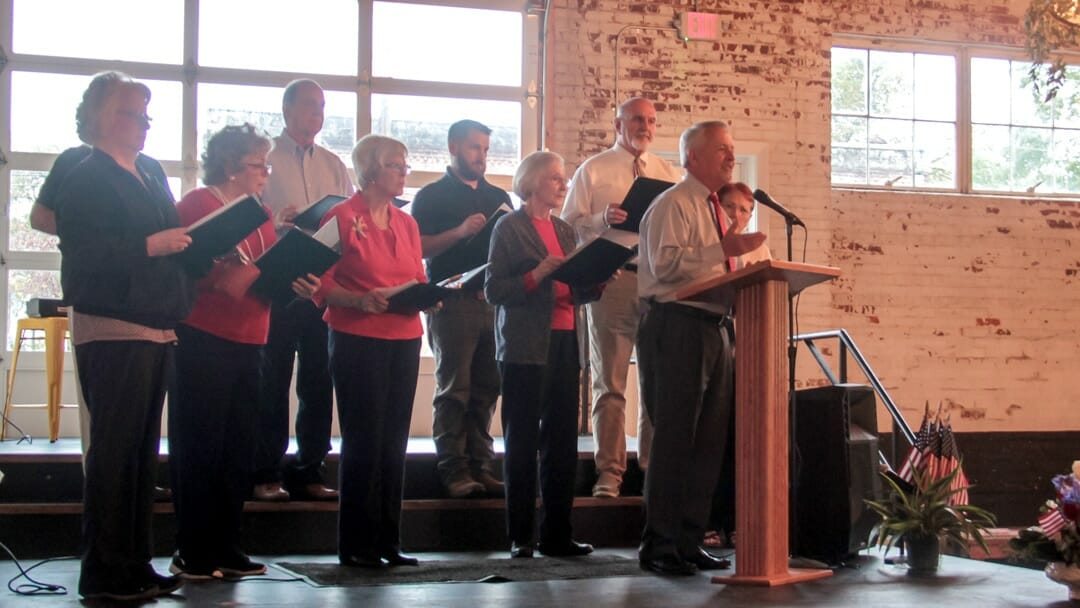 Members of the First Baptist Church of Raymond sing Salute to the Armed Forces to end the program.

The Raymond High School JROTC presented the colors to open the ceremony. 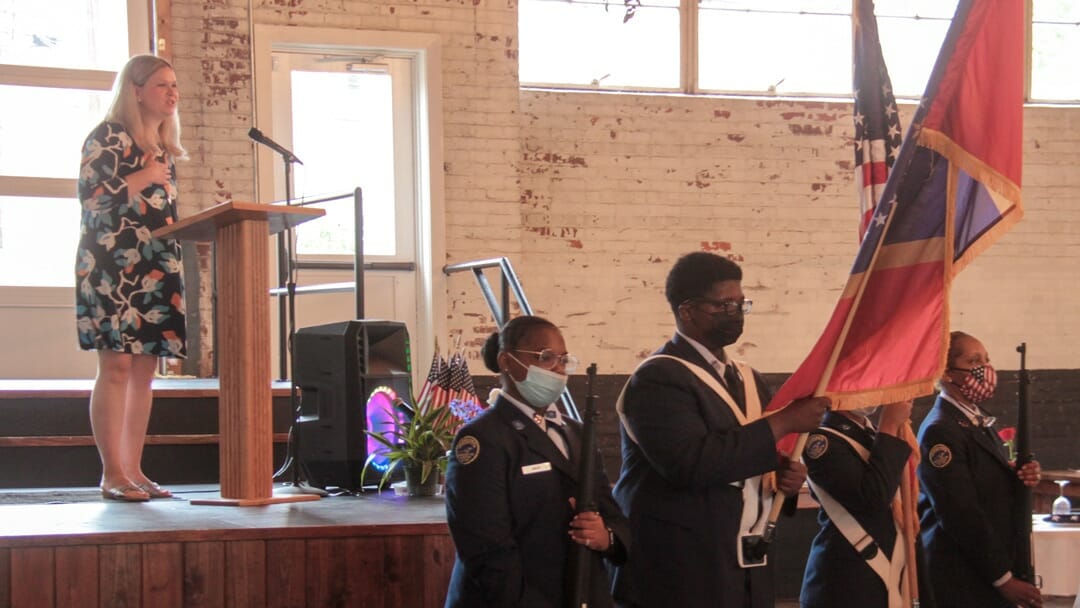 This year’s keynote speaker was Cmdr. John Culpepper of the U.S. Navy. Culpepper, a Raymond native, is a 2002 graduate of the Naval Academy and currently serves as the executive training officer for the Navy Talent Acquisition Group, based in Nashville.

He related stories of sacrifice from a letter written by the daughter of a World War II veteran who was advised by a doctor his heart was too weak for military service.

“He survived a POW camp, survived almost losing his legs and stayed in the military 28 years. Turned out, he had the heart of a lion and lived to a ripe old age,” Culpepper said. “How do you thank him for something like that? The best way to thank people for their sacrifice is to try to make that sacrifice worth it. People fought for our freedom and gave up a lot of their lives to give us the opportunities we have. It’s on us to take advantage of them by taking care of our neighbors and serve each other.” 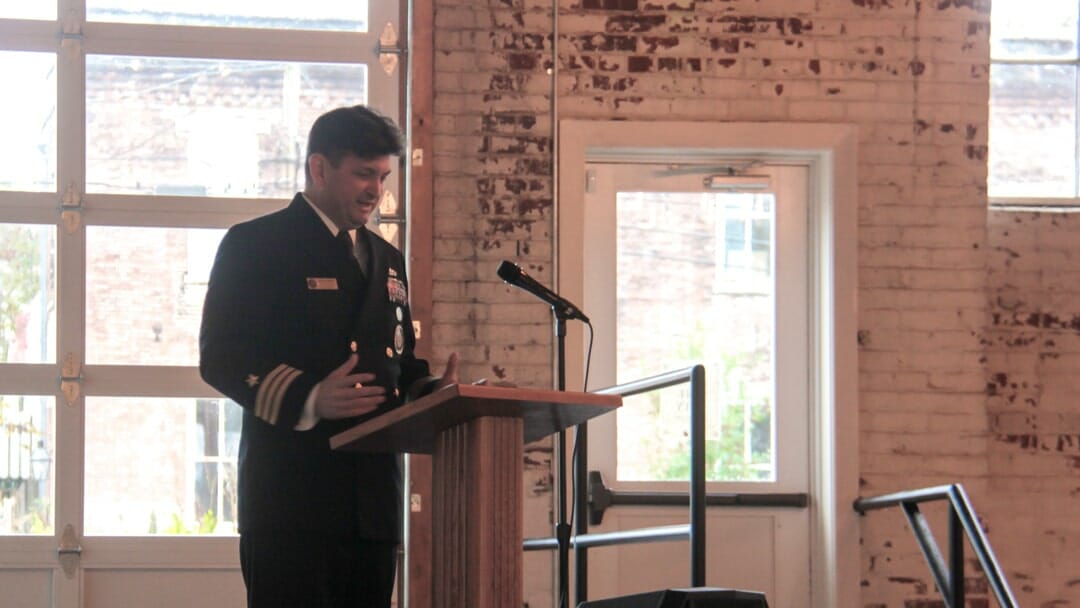 Bryan Grove, assistant director of Veterans Services, explained the symbolism behind the Fallen Comrades Table, a common feature of Veterans Day ceremonies nationwide and set up in the reception hall. 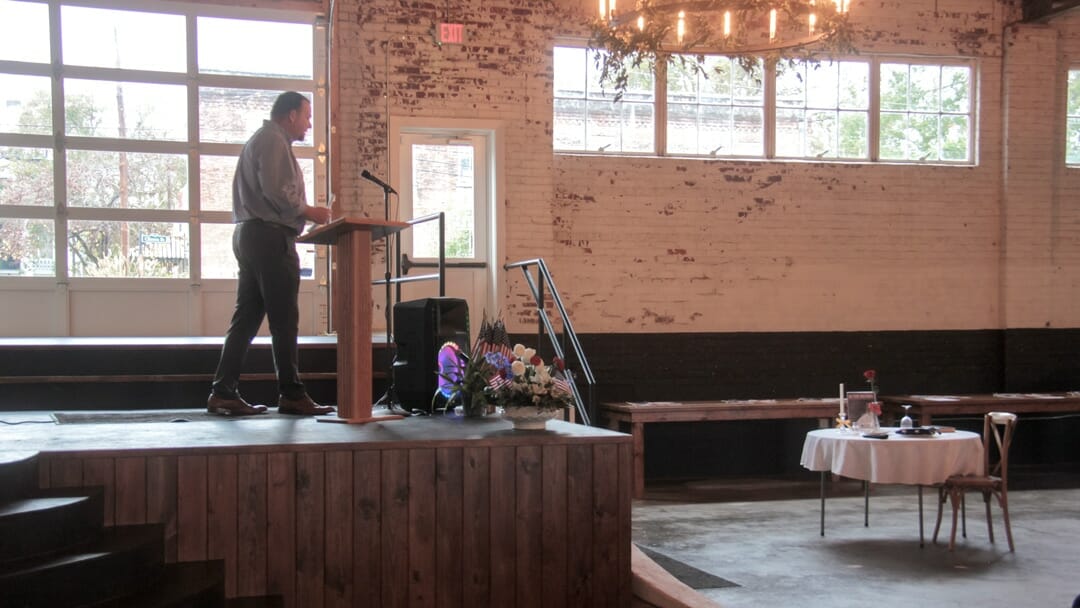 Grove noted the white tablecloth stood for everlasting devotion and concern for the fallen and missing soldiers and the purity of their motives when answering the call to service. A single red rose tied to a vase symbolized the bloodshed in the line of active duty and the commitment and determination to account for those still missing in action. A slice of lemon on a plate symbolizes the bitter fate of those who will never return, while a container of salt symbolizes the tears of families of those who sacrificed their all. An empty chair is also usually placed at the table to symbolize their absence. 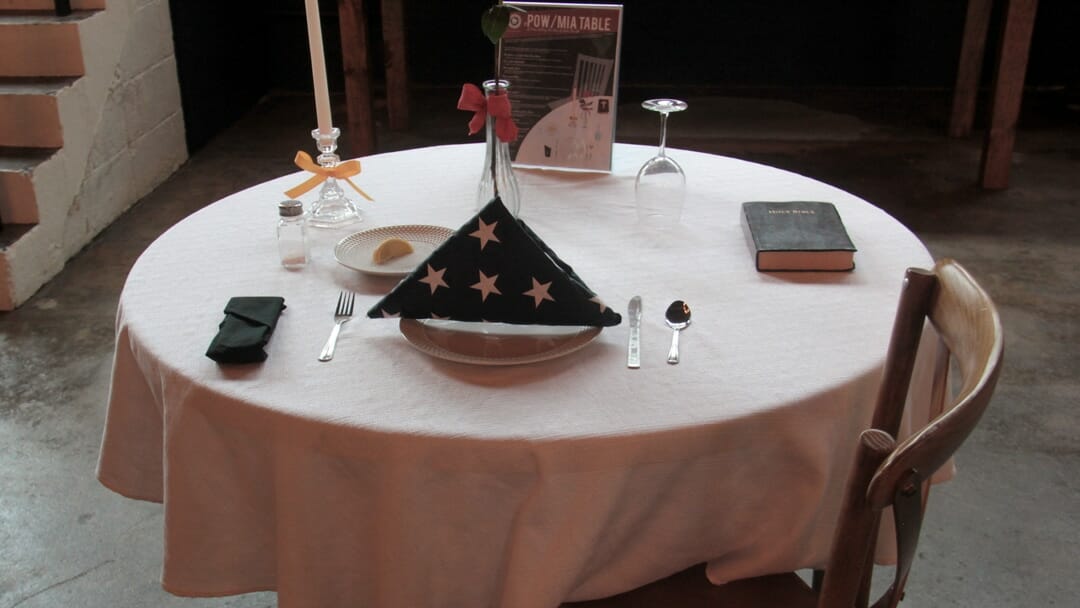