UTICA – Members of the Legislative Black Caucus presented a Senate resolution to Hinds Community College congratulating the Utica Campus for the opening of the Utica Institute Museum in March.…
By: Danny Barrett Jr. 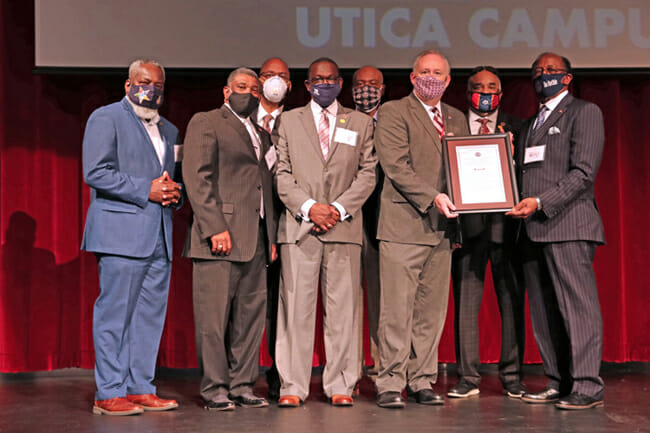 UTICA – Members of the Legislative Black Caucus presented a Senate resolution to Hinds Community College congratulating the Utica Campus for the opening of the Utica Institute Museum in March.

On March 24, 11 legislators toured the Utica Campus, which is an HBCU, to learn more about the campus. As part of their visit, legislators presented the college with a resolution from the Senate honoring the Utica Campus for the opening of the Utica Institute Museum on March 23.

The resolution reads in part: “It is with great pride that we congratulate the planners, designers and donors who are responsible for establishing this world-class museum which reflects Mississippi’s history of southern Black education and hope for the future.” The museum “features the re-creation of the first office of founder William H. Holtzclaw and the exhibit on the World-Famous Utica Jubilee Singers.”

The resolution is signed by Lt. Gov. Delbert Hosemann Jr., as president of the Senate, and Sen. Albert Butler, of Port Gibson. His district includes Claiborne, Copiah and Hinds counties.

The opening exhibit, “The Utica Jubilee Singers: A Legacy in Song,” explores the history of the world-famous singing group formed to promote the work of the college. Visitors will learn about the Jubilee’s NBC Radio program, recording contracts, world tours and their 1929 film, Radi-ators. The exhibit also discusses the modern Jubilees, with materials from the Dr. Bobby G. Cooper collection.

The museum is also opening with exhibits examining Dr. William H. Holtzclaw’s role in Southern Black Education. As a “little Tuskegee,” the Utica Institute was uniquely positioned to help improve the lives of those in Mississippi’s Black Belt through an emphasis on land ownership and community connections. The museum tells this story through the eyes of her people – Uticanites from the Utica Institute, Hinds Agricultural High School, Utica Junior College, and Hinds Community College’s Utica Campus.

“The museum project was conceived back in 2003 with our first touring exhibit,” said Museum Director Jean Greene, retired Director of Library Services and Archives. “We were thinking of ways we could share the history of the campus and the founder with people outside the Utica community. Our second exhibit was created in 2012. We followed that with the creation of a museum space in the old Hinds AHS main building in 2017.”

The museum emerged from a National Endowment for the Humanities funded project, “William H. Holtzclaw and the Black Man’s Burden,” which created a summer institute for college and high school teachers to explore Holtzclaw’s contributions to Southern Black Education. Grant co-directors Greene and Dan Fuller, English instructor and Humanities chair, worked to continue the project after the grant ended and the Utica Institute Museum is the next iteration in their goal of sharing Holtzclaw’s story with a wider audience.

“Something I’m most excited about with the museum is its potential to engage students with our rich history,” said Fuller. “So far, students have designed museum exhibits and processed archival collections.”

The museum, in partnership with the William Holtzclaw library, also houses the Utica Institute Archives and the Utica Oral History Center.

The museum is currently open by appointment for private tours with a grand opening scheduled for the fall. The “soft launch” featured an unveiling of a new historic marker for William Holtzclaw in the town of Utica by Mayor Kenneth Broome and Alderman Calvin Williams, along with video messages from the Holtzclaw family, Vice President Sherry Franklin, Mabel Beecham with the Utica Alumni Association, Mr. Utica Perry Florence and Miss Utica Daisha Golden.

To view the video and schedule a tour, visit the museum website at uticainstitute.org or call 601.885.7110.