UTICA – Desharra Stamps of Edwards said she came to Hinds Community College’s Utica Campus as a “shy and timid young lady” with a high school equivalency certificate. She left…
By: Danny Barrett Jr. 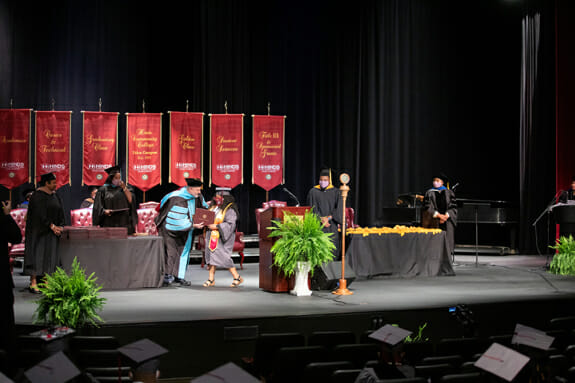 She left May 15 as one of two student graduation speakers, with an associate degree in Business Office Technology and a plan to become an administrative assistant while pursuing a bachelor’s degree.

“Over the past two years the ‘U’ has brought out the best in all of us,” said Stamps, who represented career-technical graduates. “Since coming to the ‘U’ I have grown into this outspoken, outgoing young lady, who overcame the challenges and beat the odds. I have shed some tears and stayed up many nights to get where I am today. If I can do it, you can too.”

Hinds Community College held three graduation ceremonies on Thursday, May 13 at the Rankin Campus and a fourth ceremony on Saturday, May 15 at the Utica Campus. All four ceremonies were for graduates only. Family and friends were able to view the ceremonies via livestreaming.

Jermall Germon of Canton, speaking on behalf of academic graduates, recalled Tuskegee graduate William H. Holtzclaw who founded the Utica Negro School in 1902. The school became the Utica Campus of Hinds Community College in 1982 through a federal court order.

Hinds President Dr. Stephen Vacik told students not to try to avoid the “valley of the shadow of death.”

“Try not to avoid those valleys when they come. Instead walk confidently through them. I will tell you that won’t be easy,” Dr. Vacik said. “I’m sure that many of those of us with life experience will tell you that we’ve gone through some valleys in our lives but that’s what’s made us the people we are today. I encourage you – walk proudly, walk strongly through those valleys. They’re going to help you become the people you should be.

Vice President Sherry Franklin said graduates had been through unique hardships with the pandemic but persevered.

Nearly 1,000 students participated in one of the four ceremonies, including students eligible to participate in previous ceremonies cancelled because of the COVID-19 pandemic. In total, Hinds conferred 1,761 degrees or certificates, with some students receiving more than one credential.

This year, for the first time, graduating students were tapped as speakers, including for the invocation.

Among them was Harry Watson of Madison, a music instructor on campus who had transferred to Tougaloo College without graduating from Hinds. After learning he qualified for a diploma from Hinds, he decided to formally graduate on May 15. “It’s finishing what I started,” he said.

Three others were Eric Reed of Jackson, Mycaila McWilliams of Utica and Ken Davis of Hazlehurst. Reed plans to major in biology at the University of Mississippi. He wants to become a pediatric orthodontist. McWilliams plans to attend the University of Alabama at Birmingham and major in social work. “It was awesome,” she said of her Hinds experience. Davis studied entertainment media and plans to work on his music career.