Continued teamwork between beekeepers and farmers will help preserve the world’s honeybee population, said a bee expert with the state during a special workshop on the subject Nov. 9 at…
By: Danny Barrett Jr.

Continued teamwork between beekeepers and farmers will help preserve the world’s honeybee population, said a bee expert with the state during a special workshop on the subject Nov. 9 at Hinds’ Raymond Campus.

Recent field studies tracking the use of seed treatments to ward off pests to crops such as cotton and soybeans show common insecticides, when applied properly, dissipate by the time plants reach a productive stage most attractive to bees, said Dr. Jeff Harris, a research professor and entomologist at Mississippi State University.

Dr. Jeff Harris, a research professor and entomologist at Mississippi State University, discusses the state of beekeeping in Mississippi during the Bee Informed workshop Nov. 9 at Reeves Hall on the Raymond Campus. On display in the background are suits worn by beekeepers. (Hinds Community College/April Garon)

Harris said beekeepers, researchers and farming interests need “to work together to give bees the best protection they can and minimize the risk” to the most traceable challenges to the bee population. Those include fungus, beetles and the Varroa mite, which is an external parasite first detected in the U.S. in the late 1980s.

The much-publicized “colony collapse disorder” affected some of the nation’s largest commercial beekeepers in the past decade, Harris said, and can be attributed to a combination of factors, including parasites, viruses and natural stressors for the insect, such as constant transportation.

About 15 to 25 families get a majority of income from beekeeping in Mississippi, Harris said. Before the Varroa mite invasion, there were 50 to 60, and in the 1920s and ‘30s, the state was a world leader in bee production, he said. More rigorous maintenance and threat prevention, coupled with higher startup costs for a bee box and other equipment, have combined to make “beekeeping as a way of life” rarer, he said.

The workshop, titled Bee Informed, was sponsored by the Honors Institute at Hinds and the Gamma Lambda Chapter of Phi Theta Kappa. It was part of this year’s Honors in Action Project, which encourages students to take community action in response to a topic of global interest.

Martha Hill, director of the Landscape Management Technology program of study at Hinds, spoke of the best ways to make a home garden bee-friendly. 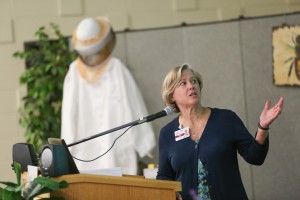 “Native plants are certainly great choices for our gardens and for pollinators,” Hill said.

Metro area beekeepers spoke on the highlights of their trade, plus some do’s and don’ts of handling a hive.

“I learn things all the time about beekeeping,” said Harold Watson, who’s been handling bees since 1960, and like Harris, is active in the Mississippi Beekeepers Association.

The best advice for beginner beekeepers is to start with a less-aggressive species and slowly work up to more active types.

“Working with a mentor is important because they can help minimize the stings and other things,” Harris said. 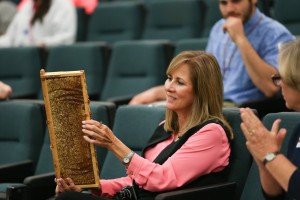 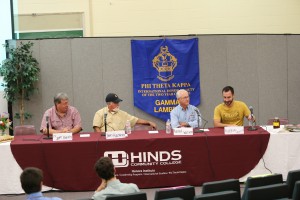 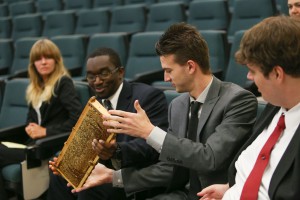 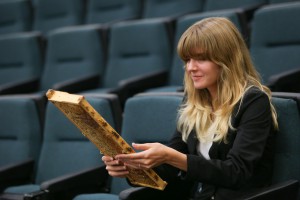