Note: The following story appears in the fall issue of Hindsight alumni magazine. For more information about the Hinds Alumni Association, see the website.

VICKSBURG – Helping people get better and having fun doing it is what Melissa Smithhart is known for among friends and associates.

By day, she’s a physical therapist assistant at Scott Robbins Physical Therapy in Vicksburg, where she helps people recover from surgery or injuries to vital joints such as shoulders, hips and knees. For the past few years, though, it’s her work making dreams literally come true for children with life-threatening medical conditions that has taken her calling in life to another level. 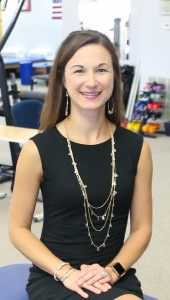 “Working in physical therapy, you see a lot of personalities and types of people,” Smithhart said. “You need to be caring and compassionate. It’s rewarding to see people get back to their prior level of function.

“With a child that has an illness, to make them happy for one day and see the smile on their face is amazing. It takes a caring and compassionate personality to see that as well.”

About three years ago, Smithhart, a graduate of the Physical Therapist Assistant program at Hinds’ Jackson Campus-Nursing/Allied Health Center, became a volunteer with the Make-A-Wish Foundation as part of her participation in Junior Auxiliary in Vicksburg. An official with the foundation had inquired about the local group’s interest in becoming liaisons between the organizations and children’s families.

“There was no one in Warren County to volunteer, so we got the staff together and said, ‘there’s no reason we can’t take this on,’” she said. “Conscience pushed me to say, ‘well, let me just say yes and see what happens.’”

This past summer, Smithhart and fellow volunteers helped make a “sensory room” for an 8-year-old girl with a debilitating developmental condition. The story made print headlines in Mississippi and beyond. Another involved a little boy who wanted to meet his favorite Disney character, Pluto, at Walt Disney World. “I love to plan kids’ parties anyway, so this was up my alley.”

Smithhart earned her Hinds degree after having already earned a bachelor’s degree in Exercise Science from the University of Southern Mississippi in 2005. During summer sessions in between, she took some of her core academic classes at the Hinds Vicksburg-Warren Campus.

Her chosen career chose her, in a way, as a teenager, she said.

“My senior year in high school, my uncle had a stroke,” she said. “He had physical therapy done, so I got to see it and it interested me. And I’ve always liked to exercise, so it seemed fitting.”

Her kindly manner with people made it easy to believe she had gone on to help people, said Pam Chapman, chair of the Physical Therapist Assistant program at NAHC.

“I passed the story on to some of her classmates from back then, and all they had to say was, ‘That’s Melissa!’ and how they fully expected her to get involved with something so good,” Chapman said. “Melissa was an excellent student and she’s amazing with everyone she works with. One of her fellow students referred to her as ‘Melissa Sweetheart.’”

Smithhart credits her Hinds experience for keeping her on track to live her own dreams.

“I studied a lot and I was just determined,” she said. “Hinds gave me the opportunity to have this career and the chance to make a difference in people’s lives.”

Young Alumnus ‘knew she was going’ to Hinds