State Rep. Tom Weathersby, R-Florence, recently presented the Hinds Community College men’s soccer team with a House resolution honoring them for their 2016-2017 state and Region 23 championships, as well as other accomplishments.

Weathersby presented the Resolution, passed during the legislative session, on April 24 at Fountain Hall on the Raymond Campus.

“When I look over this room at the players here, I’m so impressed. You can tell this is just a really good bunch of young men and a lot of young men who would be easy to coach,” he said. “It was unbelievable the number of games that y’all have won over the last 18 years, as well as all the accomplishments the soccer team has made.”

Doug Williams, who was named Mississippi Association of Community and Junior Colleges Coach of the Year for the 10th time in 2016-2017, has been soccer coach at Hinds for 19 years. He and former coach Tom Shepherd, for whom the soccer field on the Raymond Campus is named, are the only two men’s soccer coaches the college has had since the program began in 1989.

“Hinds has the oldest soccer program in the state, and we’ve only had two coaches in all that time. Tom Shepherd paved the way before me,” said Williams, soccer coach since 2000.  “When the soccer program first began they borrowed old baseball uniforms to wear as soccer uniforms. Over the years the administration of the college has really supported us and built us a great soccer facility, gave us scholarships, and just done whatever we needed to get the support we needed and continue to build and improve the soccer program.

“As a result of that, we’ve been able to attract phenomenal students. These guys are great students, they’re super guys. These guys have been easy to coach,” he said. 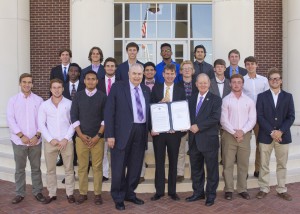