JACKSON – Pamela Bowman knew something just wasn’t right when her otherwise healthy six-year-old son began to wheeze at night. “One night, he got into bed with my husband and…
By: Danny Barrett Jr. 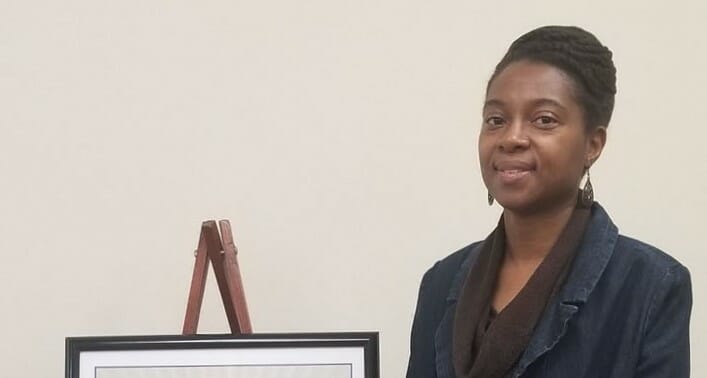 “One night, he got into bed with my husband and me,” said Bowman, 38, of Brandon. “At the time, he’d not experienced any kind of breathing problem. It just didn’t sound right, though. I’d not had any family members or anything diagnosed with asthma.”

Understanding and managing her son’s condition ended up being the basis of a career change for Bowman, who had been in social work up to then after having earned a bachelor’s in psychology and counseling years ago. It’s led to her being on the verge of a new credential under her belt, from Hinds Community College.

“It was an education on how the heart and lungs function, in general,” she said. “I had thought about doing something else before in life, but had always said I’d wait for him to get older to start it. But, between his asthma and some job-shadowing I had done, I know now that healthcare is where I want to go.”

Bowman is pursuing a credential in Respiratory Care Technology and wants to put her newfound knowledge to work in pulmonary or cardiologic care units. In class, she has shown a certain thoroughness that inspires others around her.

“She always wants to know the hows and the whys on everything, which of course is necessary for success in the program,” said Dionne Horton, one of Bowman’s instructors in the program during her first semester at the Jackson Campus-Nursing/Allied Health Center.

In her son’s case, dairy products trigger his symptoms, which are now managed in a way that allows him a normal childhood.

“It’s a buildup thing, so if he eats too much of it, he gets mucus and drainage,” she said. “And, of course, when the temperatures outside are crazy and the seasons change, he has to use inhalers more often. He’s 11 years old now and is able to do sports like baseball with proper measures. During this coronavirus crisis, we’re keeping him at home and minimizing physical contacts when we have to go outside due to him being high-risk right now.”

In a way, Bowman said, being a healthcare student in the middle of the coronavirus crisis has been a stroke of good fortune.

“I feel lucky because this program has given me a wealth of knowledge even as a second-semester student in regard to how to protect myself,” she said. “That includes basic hand hygiene, correct use and removal of personal protective equipment (PPE) and the pathology of viruses on the respiratory system.”