RAYMOND – Seven instructors from Hinds Community College Vicksburg-Warren Campus earned credentials from the college during the spring and summer semesters. The list included: Kody Britt, of Vicksburg, an instructor…
By: Danny Barrett Jr. 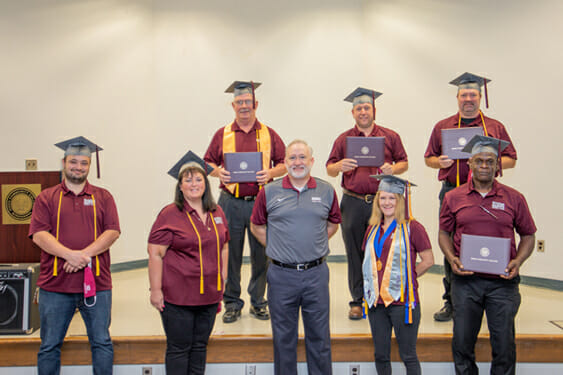 RAYMOND – Seven instructors from Hinds Community College Vicksburg-Warren Campus earned credentials from the college during the spring and summer semesters.

For Kody Britt, it meant coming to Hinds for the second time, as he was a student in the program in 2016.

“You can never have enough certificates and degrees, especially when you’re teaching at both the secondary and post-secondary levels, Britt said.

As is the case with many adult students at Hinds, Davis had returned to school to further his education and professional resume’. He also has been able to teach what he had done professionally for 20 years.

“It has been a great experience, coming to school being more mature and knowing what I want in life,” Davis said.

Welch took a similar road back to school after working in the field for years, then teaching in the emergent Industrial Mechanics and Maintenance field.

“I had started as a student at Hinds in 1974,” he said. “When I became an instructor for Hinds Community College I determined it to be a great opportunity to finish my Associate degree. Here I am, 46 years after beginning this journey, and now it is complete.”

Lelonek began at Hinds in 2017 as an adult education student as she rebuilt her life through turbulent personal struggles – first a serious car accident, then drug addiction. She became a student-worker in 2019 and is now a full-time employee.

“I love my Hinds family, and that’s what it truly is here on the Vicksburg campus, a family,” Lelonek said.

Wilkinson’s credential made two in less than two years after returning to school after more than 30 years in 2018 to knock out her core academic courses.

“I am looking into pursuing a Bachelor degree in Emergency Management,” Wilkinson said.