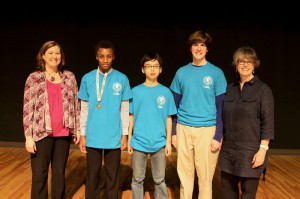 His prize included an all-expense paid trip to the nation’s capital for him and his parents to represent the state in the national competition and compete for a $50,000 scholarship. He also received $100.

The second place finisher was Edmund Doerksen, a sixth-grader from Oxford Intermediate. He received a check for $75.

The third place finisher was Edwin Griffis of Ridgeland, an eighth-grader from Jackson Preparatory School. He received a check for $50.

The state bees are the second level of the annual national competition. The first level began in November. State-level contests draw more than 12,000 schools in which millions of students participate.

“They study on their own,” Ginger Manchester, coordinator of the state Geographic Bee, said. “There are no books given out that say, ‘Learn these things’.”

The national competition will be National Geographic Society headquarters and moderated by Soledad O’Brien.

“Geography is a very important subject in school as students prepare to go out into the workforce,” said Chelsea Zillmer, associate director for the National Geographic Bee. “They need to have a global perspective to understand different cultures and different economic situations.”

This year’s bee is again sponsored by Google Inc. and Plum Creek, a private land company that owns about 7 million acres of timberland in the U.S. Hinds Community College’s Rankin Campus had hosted past state bees.