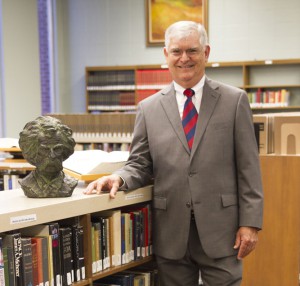 Dr. Tom Burnham in the McLendon Library on the Raymond Campus of Hinds Community College. Hinds Community College will honor Alumnus of the Year Dr. Tom Burnham of Oxford; Alumni Service Award recipient Valley Services Inc., headquartered in Flowood, and Sports Hall of Fame Inductees Linda Alford of Jackson, the late Johnny Bishop of Pelahatchie, Morris Currie of Bolton, Rob Fyke of Starkville and Jackson native Paul Jamison at the Oct. 15 Alumni Recognition Dinner. The reception is 4:30 p.m. with the dinner to begin at 5 p.m. at Mayo Gymnasium on the Raymond Campus. For information on purchasing tickets call 601.857.3363.

Note: This story is from the fall 2015 Hindsight alumni magazine. To become a member of the Alumni Association, click here.

Dr. Tom Burnham’s higher education career at Hinds Junior College got off to a rough start.

A scared young kid from rural Rankin County without a lot of real-world experience, Burnham (1967) didn’t object to the idea of a college education — it was being away from home in an unfamiliar environment that troubled him.

But Burnham, the 2015 Alumnus of the Year, not only finished his education at Hinds, he continued at Mississippi College where he received bachelor and master’s degrees and Delta State University where he earned a specialist degree and a doctorate. And, in a twist of irony considering his reluctance, his entire career has been spent in the field of education.

He is now the director of the Principal Corps based at the University of Mississippi where he recruits great teachers to become public school principals and visionary leaders.  Among his many other jobs, he has been dean of the College of Education at the University of Mississippi, 2004-2009, and state superintendent of education twice, 1992-1997 and 2010-2012, crafting education policy for the state’s more than 500,000 public school children.

Early in his own educational career, such possibilities didn’t occur to him. He came from Puckett, in rural east Rankin County, and was the first person in his family to attend college. It was a priority for his dad, Paul Burnham, who worked shift work at Marquette Cement in Brandon and had farm land.

“My dad brought me over here and dropped me off in the circle. When he dropped me off, he gave me $5. And he said, ‘Son, you better spend this carefully because I don’t know when there will be any more,’ ” he recalled.

About two weeks later, in the days when hitchhiking was safe, he caught a ride back home to Puckett. He thought he was home to stay but his dad had other ideas. About the time Burnham made it home, his dad was getting up to work the midnight shift.

“He was livid,” Burnham said, chuckling. “And he put me in the car and drove me back over here. And then went to work that night.

“My dad later joked with me, ‘You know, when I took you back to Hinds, I didn’t know you were going to go to school the rest of your life.’ It was always amusing to him that he had to bring me back to Hinds, and then I just wouldn’t stop going to school,” Burnham said.

Coming to Hinds, though, was “a logical decision. I came out of a small high school. I didn’t know very much. I think I had been on one university campus my entire elementary and high school experience. And it was also the economics of it.”

Burnham lived in Shangri-la and Central dormitories, spending his mornings in class and his afternoons either participating in intramurals or working at a Standard Oil station.  He continued on at Mississippi College with a business administration major but also took as many of the history courses he loved as he could. When he finished, he was advised to student teach in social sciences even though he didn’t have a lot of education courses.

“My plan was to go to work with Standard Oil when I finished, but I just fell in love with teaching,” he said. “After doing student teaching I was pretty much comfortable that was what I wanted to do. I never thought about doing anything else.”

His first job was teaching history at Pearl High School, and his career continued from there, until he eventually became a local principal and superintendent.

A defining moment in his life, however, was about three weeks after he finished his doctorate at Delta State University in 1985. His son, Tom, just shy of 10 years old, was killed in Rankin County when he walked in front of a car.

It took him years to come to terms with his son’s death, ultimately using it to fuel his passion for doing the right thing for children. “The only thing I could do at this point was to make things better for all children, to create a legacy for Tom through what I could do for children. I survived that period by just working to the point of sheer exhaustion,” he said.

Now at the Principal Corps, he tries to take what he’s learned over the years about leadership and education and pass that on to aspiring young school administrators, continuing to mentor them after they are Principal Corps graduates.

He was a mentor for Dr. Norman Session, former Pisgah High School principal who became vice president for the Rankin Campus and Jackson Campus-Academic/Technical Center on July 1.

“The first time I met Dr. Burnham he was state superintendent, and I attended a state Board of Education meeting. We became close during an 18-month training at Ole Miss. After the training he was assigned to me as my personal mentor, but he was advising me long before that,” Session said. “Dr. Burnham is one of my mentors, and I consider him a friend. He is very knowledgeable about education issues and just about life in general. He is a very strong leader and a mentor to many.”

Burnham is married to Terri, who has also had a life-long career in education. His sister, Cathy Allen, is a retired Rankin County teacher, his daughter, Cassondra Vanderford (1989) married to Craig Vanderford (1990), is now assistant principal at Brandon High School. One of his two grandsons attended Hinds. Both Brett and Ty are now Ole Miss students.