State Sen. Dean Kirby referred to himself as a “spoke in the wheel” in 2009 during the celebration of the new Career-Technical Education building Hinds Community College had then recently…
By: Cathy Hayden

State Sen. Dean Kirby referred to himself as a “spoke in the wheel” in 2009 during the celebration of the new Career-Technical Education building Hinds Community College had then recently acquired.

But  Kirby of Pearl, this year’s Alumni Service Award recipient, is much more than that when it comes to support of community colleges, Hinds Community College in particular and especially the Rankin Campus.

He will be honored along with Alumnus of the Year Dr. Wayne Lee and Sports Hall of Fame inductees John Earl Hagan, a Jackson native who lives in Homewood, Ala.; Jaret Holmes, a Clinton native who lives in Edwards; Christi Smith, a Pearl native who lives in Flowood; Oliver P. “Pete” Stone of Vicksburg and the late Freddie Townsend of Pelahatchie at a dinner at 5 p.m. Sept. 22 at Mayo Gym on the Raymond Campus. 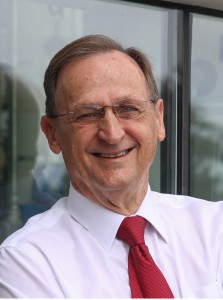 A legislator since 1992, Kirby was a key player in the 2008 Legislature in helping Hinds President Dr. Clyde Muse persuade legislators to support a special appropriation to purchase what was the United Association of Plumbers and Pipefitters Gulf Coast Regional Training Center on Commercial Park Drive off Greenfield Road in Pearl.

“We never would have been able to acquire the building from the plumbers union without his assistance and without his knowing how to get it done,” said Muse, who has known the Rankin County legislator and retired insurance executive for more than 20 years. “He was able to work through the minefield and get us some help to enable us to buy that building, which, by the way, is one of the finest buildings in the entire district. We’ve got it full of students right now.”

At the time, Kirby chaired the Senate Finance Committee, which handles capital improvement bonds. Hinds paid $3.2 million for the building that appraised for three or four times that with a special Fiscal Year 2009 state bond appropriation along with additional capital funding support from Rankin County.

Kirby remembers well when Muse approached him about helping to get state funding for the building.

“It helped at the time that the lieutenant governor was Phil Bryant, who had gone to Hinds. Dr. Muse came to me and said, ‘Dean, we’ve got this great deal. It will really help your area and it will really help Hinds a whole lot,’” Kirby recalled.

Kirby said it didn’t hurt either that the words “Gulf Coast” were in the name of the building just a few years after Hurricane Katrina. After he made his case from the podium of the Senate floor, “everybody said it’s a great deal.”

A Pearl High School graduate, Kirby’s relationship with Hinds goes back to his years as a Mississippi College basketball player when he was teammates with former Hinds basketball players or adversaries against current Hinds players.

“When I was at Pearl High School everyone knew about Hinds,” he said. His Mississippi College freshman basketball team played the Hinds team, which was then based on the Raymond Campus. He’s close friends still with many Hinds alumni from the basketball days, including Harlan Stanley, J.W. Barnes and Rep. Tom Weathersby, his colleague in the Legislature.

Years later when he opened his insurance office and Hinds began construction of the Rankin Campus, which opened in 1983, he met Jimmy C. Smith, who is retired as vice president of the campus. As the campus was being constructed, Smith had an office in a trailer nearby.

“Dean was very supportive. His office was right there on Airport Road. I got to know him when I was in the little trailer house across the street from him. I could go to his office and sit down and talk to him,” Smith said. “He was very supportive of education, period. As far as funding for the community colleges, he was my point person. I would always go to him any time there was a bill that Dr. Muse was working on.”

Said Kirby: “I’ve tried to be involved as much as I could without being in the way. Anything Dr. Muse asked for, I tried to get. He knows a lot more about running a community college than I do. If he says that needs to be done, then I believe him.”

[tweetable alt=””]Kirby calls the campus in Pearl one of the greatest engines of economic progress in the county.[/tweetable] “I never dreamed how much it would mean to Rankin County, how important it would be to those people that are maybe married and out of school and want to continue their education. It’s really been helpful,” he said. “I’m really excited about Hinds and what it has done for Rankin County, and hopefully we’ve been as good to Hinds as Hinds has been to us.”

Over the years Kirby and Muse have collaborated many times for the community college system, but none of their projects has been more successful than the Rankin Campus Career-Technical Education building, which got a new attractive and more visible boulevard street entrance over the summer.

Kirby said he helped negotiate the purchase of the land with the Pearl mayor, who wanted part of the land for a new fire department. “I was involved in the initial negotiations for the right away. I got a call from Dr. Muse saying, ‘We need a better entrance because it’s behind a couple buildings. Do you think you can handle that?’” Kirby said.

Most recently, Kirby spoke to the Mississippi Association of Community and Junior College Trustees at their summer conference.

“He is one of the finest legislators that we have at the Capitol. He is very competent, he always does his homework on every piece of legislation that comes to him and his committee. He always has an open door for the community colleges.”