It was a wooden ventriloquist doll named Jerry that brought Rebecca Brooks Prewitt out of her shell as a child. “My parents taught speech at Hinds,” Prewitt remembers. “They were…
By: Danny Barrett Jr.

It was a wooden ventriloquist doll named Jerry that brought Rebecca Brooks Prewitt out of her shell as a child.

“My parents taught speech at Hinds,” Prewitt remembers. “They were very verbal and well-spoken. As a child, I was very shy. I began using Jerry when I was in the seventh grade. Jerry became my voice. He’s been with me quite some time.” 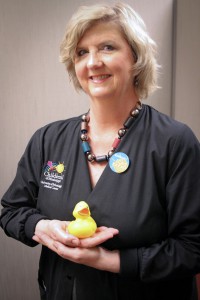 Rebecca Prewitt, a pediatric outpatient social worker at University of Mississippi Medical Center, holds a rubber duckie, one of many toys she keeps around as a licensed play therapist. She earned her specialization in the emerging field of study earlier this year. (April Garon/Hinds Community College)

These days, Prewitt, the daughter of longtime Hinds teachers Sue Brooks and the late Fred Brooks, is building on her own use of play as a voice to foster positive mental health in children. Earlier this year, Prewitt became a registered play therapist with the Clovis, Calif.-based Association for Play Therapy (APT). It came after completion of a specialized play therapy career track degree program at the University of Mississippi – the first of its kind in the nation.

Her upbringing spent in the academic atmosphere of Hinds shaped her own desire to be an educator. Her own experiences helped her see an even greater mission as it relates to children’s emotional health.

“I grew up in the environment of academia, being a third-generation teacher,” said Prewitt, whose parents are the namesakes of Brooks Hall, where speech is taught, and Brooks Theatre on the Raymond Campus. A brother, Rick Brooks, and one of her sons, Matthew, are Hinds alumni.

Prewitt’s educational journey began at Hinds where she was extremely involved in campus life. She was a member of the Hi-Steppers dance team, sang in the choir, was an officer in Phi Theta Kappa and was involved in the Wesley Foundation.

She moved on to the University of Southern Mississippi where she received a bachelor’s in elementary education and a master’s in social work. She taught in Oklahoma for four years and one year at Hinds, in the Resource and Coordinating unit under former vice president Bob Mullins.

“I was in education for a while but wanted to do more counseling,” she said. “My goal at that time was to be a therapist. I was excited to find a way to blend the two. I don’t formally do play therapy, but it informs my work here.”

Those like Prewitt who are licensed in the discipline help client children use play as the language by which their emotions are expressed. The association claims a membership of more than 1,000 individuals and credentialed play therapists nationwide, a number that includes 35 in Mississippi.

Play therapy “is separate from my actual work, but it’s all tied in,” said Prewitt, whose official job is as a pediatric outpatient social worker at the University of Mississippi Medical Center. “In play therapy, children are brought over to a play room. As play therapists, we facilitate. We start at ages 3 to about 12. They may be too young to talk about their feelings, so they play out what’s bothering them.”

UMMC collaborated with Ole Miss to provide space and clients for Prewitt to complete a practicum for her degree in the specialty, though the discipline is not part of the hospital’s array of services.

Typically, cases are brought to specialists such as Prewitt through schools, pediatricians, other doctors’ offices and word of mouth. Analyses from play sessions can help school counselors, parents and other professionals draw conclusions.

“Children experience trauma of many kinds,” she said. “We have what we call ‘Big-T Trauma,’ which is like an earthquake, a hurricane, seeing someone shot or being in a family experiencing divorce or loss. Then we have ‘Little-t traumas,’ such as when a bicycle gets stolen, someone won’t share their cookie, or a friend moves a few blocks away.

“Play is a child’s language, and the toys are a child’s words,” she said. “So, we choose toys of different categories. One is real life, such as a toy kitchen area. Another is expressive toys, like puppets, stuffed animals, art or clay. The third is the aggressive category, such as dart guns or handcuffs like the cops use. We encourage them to show metaphorically what’s happening. A child who has distress might do some kind of nurturing activity, like they might serve somebody food or drink. They might put a doll to bed or give it a bath. These are all ways they might soothe themselves.”

As for Jerry, her ventriloquist doll, his legs and arms aren’t as sturdy as they used to be, but he’s still alive and kicking.

“I might have Jerry tell a story about his life, and it might mirror something going on in the child’s life,” Prewitt said.

Prewitt’s mother still remembers how Jerry – referred to almost in human terms when the subject comes up – helped a shy girl grow into a confident woman.

“My earliest memory of it was when she was in elementary school,” Sue Brooks said. “She was interested in ventriloquism, so we were able to get her Jerry and he really brought her out.

“She was always interested in things, but she was just shy. With Jerry, she could meet people and address them. He helped her find her voice.”

That same idea is being put to work for children with whom Prewitt works as a play therapist.

“If a child can play out their problem and put it out for themselves and us to see, there’s not a lot that can’t be helped,” Prewitt said. “Not a lot can be done to change a child’s situation, but the therapy can help the way a child relates to their situation.”