“Taking classes online is a great experience; It’s a way for nontraditional student to get their foot in the door with their education."
By: Danny Barrett Jr.
Photography by Brad Smith 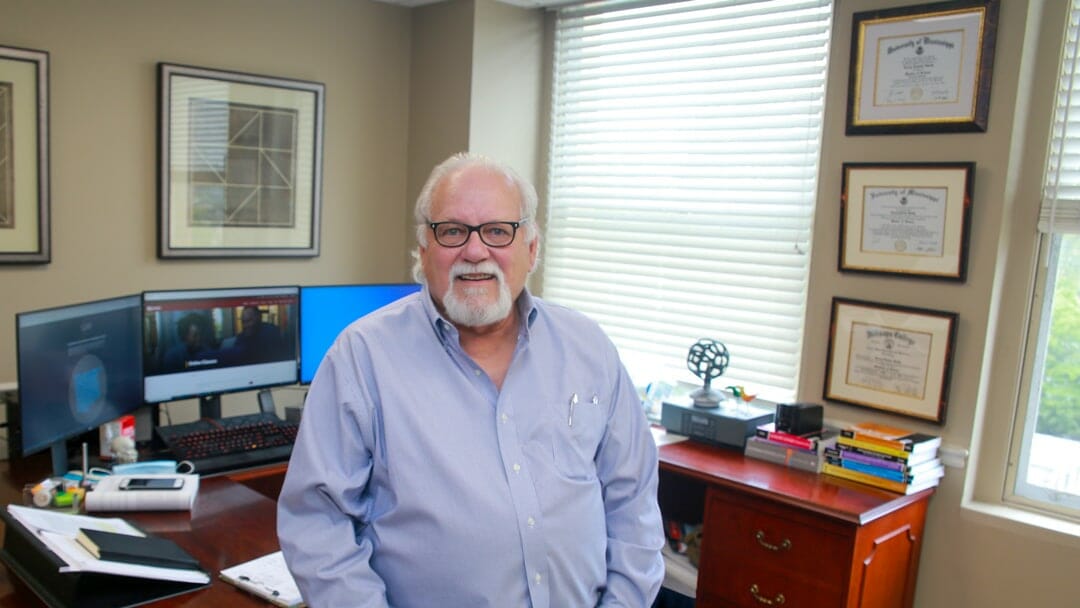 At 73, Larry Smith would appear to be on the back stretch of a long career in two varied sciences, engineering and healthcare.

At the same time, though, he’s been a lifetime learner throughout his career and hasn’t stopped seeking new skills.

“I really haven’t ever stopped taking classes,” Smith said. “I just like to learn stuff. I like to take things that challenge me. The courses at Hinds are challenging and allow me to get into areas I normally wouldn’t study.”

For the past eight years or so, Smith, a senior policy analyst for the Center for Mississippi Health Policy in downtown Jackson and holder of five advanced degrees, has taken online courses at Hinds Community College in everything from algebra to literature to marriage and family.

“I had trigonometry and algebra years ago, but I just wanted to really challenge myself,” said Smith, whose previous careers included being an epidemiologist with the state Department of Health and being an environmental engineer in the private sector. In the 1980s, he also taught two sections of chemistry at Hinds’ Rankin Campus on an adjunct basis.

“Those two courses were some of the toughest classes you can get,” he said. “But math to me is like solving a puzzle. And as an epidemiologist, we solve puzzles by looking at diseases and the causes of them.”

The eLearning Department at Hinds provides robust opportunities for students by using technology in or out of the classroom and has been recognized as a leader in online classes. Earlier this year, Nashville-based Premium Schools, a clearinghouse for information on colleges and degree programs available on the web, rated Hinds the best community college in Mississippi for online courses.

The survey made note of the college’s approximately 500 courses through the Mississippi Virtual Community College and the diversity of career and technical education courses available virtually. MSVCC is a consortium of the state’s 15 community colleges that offer Internet-based courses.

Smith notes it takes just as much discipline to excel online as it does in the classroom, even for someone with a doctorate in preventive medicine from the University of Mississippi.

“The thing with online classes is that you have to keep up,” he said. “It’s not like regular classes where you can cram and get things done.”

This past summer, Smith had a chance to catch up on his knowledge of American literary works, namely that of Mississippi’s lone Nobel laureate William Faulkner.

“Most of my life, I’ve been a pure scientist,” he said. “So, some of the literature and humanities courses I didn’t particularly care about when I was younger. But, in the last few years, I’ve really enjoyed them.”

Students in the course were tasked with reinventing their favorite literary work – in Smith’s case, Faulkner’s “Barn Burning” – and reimagine it as a film adaptation, said Melissa Buie, academic dean at Hinds and Smith’s instructor for the course.

“His film ideas included a setting in Franklin County, near the Homochitto National Forest, and was based on his upbringing by his grandmother in rural Mississippi,” Buie said. “As he explained the project, I particularly loved that he mentioned his ninth grade English teacher as an inspiration for his story choice. He thanked me for allowing him the opportunity to catch up on American literary works. And I am thankful for having had the opportunity to teach him.”

Whether it’s a similar personal challenge or restarting a career, taking online coursework can open many doors to success, Smith said.

“Taking classes online is a great experience,” he said. “It’s a way for nontraditional student to get their foot in the door with their education. For someone who’s older now and their children might be older but they want to go back to school, this is a way to get their feet wet without committing to too many hours per semester.”

For more information on online classes at Hinds, visit hindscc.edu/online