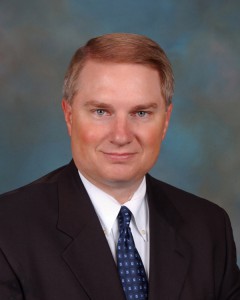 Dr. Norman Session will be the new vice president of the Rankin Campus and Jackson Campus–Academic/Technical Center (JATC) at Hinds Community College, as of July 1, 2015. He is currently serving as principal of Pisgah High School in the Rankin County School District, where he won the distinction of being named the district’s Principal of the Year in 2007 and 2010.

Session’s selection was approved today (May 6, 2015) by the Hinds Community College Board of Trustees at its monthly meeting. He is replacing Dr. Sue Powell, who retires June 30 after 12 years as the vice president for the Rankin and Jackson campuses.

“Dr. Session is a graduate of Hinds and has also served as an adjunct instructor at the Rankin and Jackson campuses. As Pisgah High School principal, he led early efforts to make college more accessible and affordable to his students by offering dual enrollment courses at Pisgah,” said Dr. Clyde Muse, president of Hinds Community College.

“The knowledge and experience he has gained as a secondary education leader will serve the college and community very well, and we look forward to him joining our leadership team,” Muse said.

“Hinds gave me the foundation that I needed to be successful at the university level,” Session said, adding, “Even though Hinds was a large institution, it maintained a small school feel with small class size and individual attention.”

Dr. Ben Fatherree, retired history department chair who still teaches at the Raymond Campus, gets the credit for Session’s pursuit of a career in education. “He was the catalyst – so intelligent, so energetic, and so knowledgeable. He never brought the first note or book to class. He knew it all.

“I was going to study accounting, but I knew if I could be a fraction of the educator he was, I could be successful,” Session said.

After earning his first master’s degree, Session was a 22-year-old adjunct instructor at the Jackson Campus-Academic/Technical Center. About that experience, he said, “We have to be able to be flexible and meet the needs of all students, including adult learners. That is one thing that I learned teaching at the Jackson Campus.”

At Pisgah, school activities keep him busy most nights of the week, but he signed up again to be an adjunct instructor for Hinds, teaching Western Civilization I and II and Sociology in the dual enrollment/dual credit program at Pisgah High School.

“At a small school, we couldn’t offer everything to our students. Dual enrollment with Hinds was a way to let our kids know that college was within reach, especially for a first-generation college student,” Session said.

This year, one Pisgah senior will graduate with 38 college credits, and several will have more than 25 college credits. “The partnership has led to more scholarship dollars for our students,” he said.

When he reports to his new office at Hinds’ Rankin Campus, Session plans to meet with faculty and students and focus on building relationships with the community.  “I think that the college and community are intertwined; you can’t separate them. You have to pull in all the stakeholders,” he said.

The Hinds tradition carries on with his family. His wife Suzanna also attended Hinds. Their oldest son, Paxton, is a junior at the University of Mississippi who graduated from Pisgah High School with 29 dual enrollment college credits from Hinds. The couple’s other son, Sloan, graduates this month with 26 dual enrollment credits and will attend the Hinds Rankin Campus.

“Everybody recognizes that Hinds is a flagship institution in Mississippi,” he said, “I’m excited for this opportunity and ready to get to work.

Hinds CC student finds his niche on the Rankin Campus