Although the closure of the Mississippi Baptist Hospital/Gilfoy School of Nursing in 1971 marked the end of an era, its 1,407 graduates received the skills and knowledge to provide the…
By: Cathy Hayden

Although the closure of the Mississippi Baptist Hospital/Gilfoy School of Nursing in 1971 marked the end of an era, its 1,407 graduates received the skills and knowledge to provide the best of care for their patients.

The majority of the practicing nurses who graduated from the Gilfoy School of Nursing felt that its memories and legacy were still very much alive. Before its closure, the school had a long association with Hinds Community College, which taught the academic studies to provide the foundation for the three-year course of study.

In August 2016, the Mississippi Baptist Hospital/Gilfoy School of Nursing Alumni Association, which had in the past served in the distribution of the scholarship awards, was permanently closed. With these funds now at Hinds Community College, the wishes of the graduates to maintain the legacy of the school will be honored.

One of these graduates is Leola Cowart, a 1948 graduate of the Mississippi Baptist Hospital / Gilfoy School of Nursing. In March 2012, she established the Dennis D. and Leola K. Cowart Scholarship at Hinds Community College at the request of her husband, who died on Feb. 24, 2012. 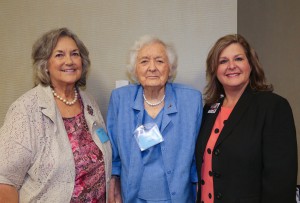 Dennis D. Cowart attended Hinds Junior College from 1949 to 1950. Leola Cowart also attended Hinds as a part-time student after she completed nursing school. The Cowarts lived on campus in a small cottage when their daughter was born.

After completing nursing school in 1948, Leola Cowart worked for the Mississippi Department of Public Health for 13 months. She was then employed by Foster General Military Hospital, which later became Veterans Administration Hospital. She retired 36 years later. She also served as a nurse volunteer for the American Red Cross for more than 50 years.

To apply for a Hinds Community College Foundation scholarship, go to the Admissions tab on college web site at www.hindscc.edu or click here. The deadline for fall 2017 is Feb. 15.