Dr. George Hopper has been sawing wood a long time in his professional career.
By: Danny Barrett Jr.

Dr. George Hopper worked at Anderson Tully lumber company in Vicksburg while he attended Hinds in the years after high school. Quite fittingly, he has been sawing wood in his professional career ever since – and he’s been recognized by his peers for his work. 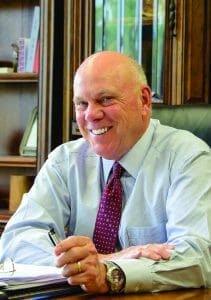 This past fall, Hopper won the Excellence in Leadership award for 2017 from the Southern Association of Agricultural Experiment Stations Directors at the Association of Public Land-Grant Universities. Hopper’s directorship of the Mississippi Agricultural and Forestry Experiment Station and role as dean of Mississippi State University’s College of Agriculture and Life Sciences formed the basis for his award, presented at the APLU’s annual meeting in Washington, D.C.

Hopper is also dean for the university’s College of Forest Resources and director for its Forest and Wildlife Research Center.

The 16 experiment stations in the state are closely associated with the Mississippi State University Extension Service, which share knowledge and solutions with farmers, business people and government agencies throughout the state and beyond. One station is housed on Hinds’ Raymond Campus, as part of the T.H. Kendall III Agriculture Complex. Another, for cattle, the Gene Morrison Brown Loam Experiment Station, is on the outskirts of town.

“Our role and responsibility is to serve the people of Mississippi,” Hopper said. “Part of that is developing better farming and livestock practices and ways to protect the environment.”

For Hopper, coming to Hinds meant getting to Raymond from the River City when Interstate 20 was barely complete on the western side of the state. He juggled work in the evenings and attended class daily, from 8 a.m. to 3 p.m.

“Four or five of us from Vicksburg commuted to class. But, we had great memories and an excellent education, indeed,” he said. “As an administrator, I know what I learned at Hinds means the teachers were good. It got me on the right track. Hinds had a good reputation for science even back then.”

After finishing STEM-related prerequisites at Hinds, he earned his bachelor’s in chemistry from MSU, then moved on to Virginia Tech University where he earned his Ph.D. in plant physiology.

Hopper worked at the University of Tennessee for a time, then went into administration in forestry/wildlife. He moved on to Mississippi State as dean of college of forest resources. Eight years ago, he was asked to head up agriculture in addition to forestry.

Part of his job is getting students involved in research. It is some of Hopper’s and others’ early research in the area of biomass energy that Stephen Dicke, an Extension professor for Forestry, remembers.

“I first met him in 1979,” Dicke said. “We’d be cutting sycamore trees in the hot summer and weighing the stems, all for research. I saw a quick-witted optimist with a real heart. He’s gone above and beyond what’s been asked of him by doing a lot of extra work.”

Hopper credits his Hinds experience for shaping his career and advises students to be unafraid of few challenges in their own lives and studies.

“People are interested in the curious. And that’s what drew me to science in the first place,” he said. “Our society needs the STEM areas and needs leadership in that area. Fundamentally, we need to have clean water and a healthy and safe food supply.”