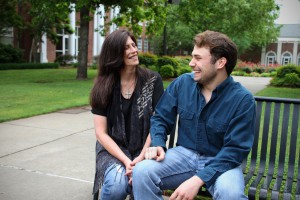 Melissa Mason, left, and Corey Hulett, share a laugh in between classes at Hinds Community College earlier this month. Mason, who returned to school after two decades, and son, Corey, are graduating May 15.

RAYMOND – Life got in the way of Melissa Mason’s plans more than 22 years ago to start her education at Hinds Community College.

“I started Hinds and really wasn’t sure what I wanted to do,” Mason said, remembering a sudden move from her home state to New Jersey with the twin challenges of marriage and a new baby. “I found out I was pregnant, then had to move up there with my husband’s job.”

Mason, who now lives in Clinton, had planned to finish her schooling there, but plans collapsed and, within two years, she was back in Mississippi. The next 15 or so years brought a mix of joy and disappointment – a second son, Nathan, was born, while a second marriage ended. In between, Mason juggled jobs in everything from home detailing to law enforcement. The situation left son Corey Hulett, also of Clinton, as a sometime caretaker for his younger brother.

“I was working two jobs and having Corey take care of Nathan,” Mason said. “I wasn’t home but for three hours a day. I just decided it was time to go back to school and have just one job.”

On May 15, Mason, 47, and a now grown-up Corey, the baby boy she had when she first left Mississippi, will join other graduates as Hinds stages a record eight commencement ceremonies to wrap up the spring semester.

By the time Hulett was ready to chart his own course after high school, it took a key question from mom to convince him to do so cautiously.

“In high school, you have big dreams and don’t always see reality,” he said. “I love performing and love to sing, so I wanted to go to New York to be a dancer. I didn’t want to come to Hinds and didn’t care about anything else. My mother said, ‘Well, what happens if you don’t make it through the auditions? If you don’t make an audition, you don’t get paid.’ I’m thankful she talked me into it, because I’ve met some amazing people.”

Mason, a student at Jackson Campus-Academic/Technical Center, will receive an Associate of Applied Science degrees, with certificates in medical data technology. Hulett, a student at the Raymond Campus, is earning an Associate of Arts degree. They performed together on stage as members of the college’s Montage Theater of Dance, where Corey was the male lead at the multitalented dance troupe’s performance at Lincoln Center for the Performing Arts in New York City and at Fringe Festival in Edinburgh, Scotland.

They count Director of Dance Tiffany Jefferson among numerous kudos they have for Hinds faculty.

“Corey Hulett and Melissa Mason are what Southerners like to say ‘good people’,” Jefferson said, adding they just needed a place “for their true light to shine. That place for them was Hinds Community College.”

Paula Rodriguez, chair of the Speech Communication, Theater and Dance Department, said she will be sad to see them go “but I know that great things are waiting for them in the future. They have overcome some real obstacles in their lives to become dedicated students with impressive goals.”

“Melissa is just one of many students who come to Hinds just because they are no longer in their late teens or early 20s and are scared and unsure if they are doing the right thing,” Waite said. “However, as an educator, I can attest that many times these students turn out to be the best ones in our classrooms.”

“She has overcome many obstacles in life, and she made the decision to complete her education in spite of the circumstances facing her upon her return to school,” said Dr. Marquise Loving, academic dean at the Jackson Campus-Academic/Technical Center.

Awards along the way are a source of pride for both mother and son. Mason has been a Presidential Scholar for three semesters, which means she had a 4.0, and also made the Dean’s List. Hulett received the Jeffrey Gibbs Memorial Scholarship for dance and a Beyond the Stage Award. Both mother and son are members of Phi Theta Kappa.

Both plan to attend Belhaven University, where Mason hopes a four-year degree will help her add physician’s assistant to her resume.’

“I don’t have to encourage my boys to go to college. They’ve seen what I had to do,” she said.

Hulett wants to back up any work in the arts with a solid foundation in business or physical therapy.

“I want to get an athletic trainer’s license to assist injured dancers,” he said.

Hulett said Hinds has made him a better person because of the family-like atmosphere and the way he and his mom were treated. “I treat people differently, I’m more humble and sympathetic,” he said.

“All I’ve ever wanted to do is help people,” Mason said, adding her desire to do so has motivated her to instill self-reliance in her sons.

“If you really want to go back to school and get an education, then Hinds Community College will make that happen if you’re really serious,” Mason said.

Montage Theater of Dance to perform with Universoul Circus