UTICA – Eleven members of the Legislative Black Caucus toured Hinds Community College’s Utica Campus in March to get a better sense of the strengths and challenges of Hinds’ HBCU…
By: Danny Barrett Jr. 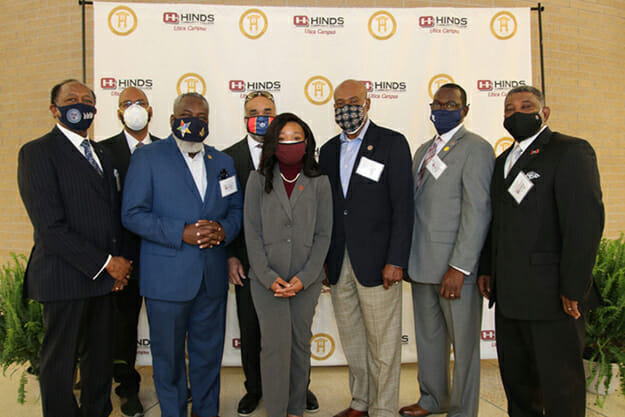 UTICA – Eleven members of the Legislative Black Caucus toured Hinds Community College’s Utica Campus in March to get a better sense of the strengths and challenges of Hinds’ HBCU campus.

“We came down for the February Black History program, and we were so impressed with the history that we wanted to bring more legislative members to learn about the history of the campus,” said Rep. Charles Young of Meridian, a member of the Legislative Black Caucus and the House Universities and Colleges Committee.

“We wanted to come meet the president, and we also wanted to come talk about the needs for Hinds and Utica,” said Young, who attended Meridian Community College.

Among those who toured the campus on March 24 were Sen. Albert Butler of Port Gibson and Reps. Oscar Denton of Vicksburg, John Faulkner of Holly Springs, Stephanie Foster of Jackson, Kabir Karriem of Columbus, Carl Mickens of Brooksville, De’Keither Stamps of Jackson, Zakiya Summers of Jackson, Cheikh Taylor of Starkville and Rickey Thompson of Shannon. Also on the tour were Utica Mayor Kenneth Broome and college President Dr. Stephen Vacik.

The Utica Campus was founded as the Utica Normal and Industrial Institute by Dr. William Holtzclaw in 1903, which makes it the oldest of the six college campuses.

“Dr. Holtzclaw’s vision was really to create a place, an opportunity for people of color to have a way to find a better life,” Dr. Vacik said. “We want to offer an experience that is unique, to allow someone who is maybe from an underrepresented minority to come and have a place where they can come in and feel ‘I get to be a leader here. I don’t have to fight for that opportunity. I have an opportunity to be a leader here.’”

The Utica Campus offers students a small, personalized education experience with residence halls, food service and a number of organizations, including the Student Government Association and Phi Theta Kappa, that give students an opportunity to rise to leadership positions. It also offers an emphasis on STEM-related courses and programs.

At an HBCU, minority students embrace the culture of attending an institution that was founded to provide them a quality educational experience focused on them. Many of the scholarship programs and additional services for students at the Utica Campus are grant funded, Vice President Sherry Franklin said.

Franklin told legislators that the Utica Campus has “a sense of belonging in the atmosphere. It’s a small, personal environment for those who are not ready to go to a university but they still want that experience of an HBCU,” she said. “On the Utica Campus, we give you a little taste of HBCU at a community college.”

As part of the opening program before the tour, the caucus heard from Jhada Carmel, who was selected to receive the Foundation for Education & Economic Development Scholarship, which is sponsored by the Foundation for Education & Economic Development, Inc., with support of some members of the Mississippi Legislature’s Black Caucus.

Carmel, of Madison, is a second semester freshman who is active in a number of organizations and is maintaining a 4.0 GPA. She graduated from Madison Central High School, where she said she was in a “big school just being a little nobody. … I felt out of place. I was a minority.

“As I was doing research for colleges, I was looking for a quality education but also affordable fees because college debt would not do any good in my family right now,” said Carmel, who also said she felt she would benefit from the HBCU experience.

Highlights of the tour included the recently renovated Student Union Building and gymnasium. Legislators also saw the residence halls, which have small rooms, low ceilings and shared bathrooms. “They were built in a style that’s no longer popular. That’s not something that sells very well in today’s environment,” Dr. Vacik told them. “You can see for yourself this is an area that needs work.”

Along with some other student-focused spaces, renovations or replacement of the residence halls will be one of our top priorities in which the college needs financial support to achieve, he said.

Although the Utica Campus enrollment is down due to the pandemic, the campus typically serves about 1,200 students. During the summer, it hosts several programs for area high school students. For more information about the Utica Campus, see hindscc.edu/campuses/utica