Logan Wilson did more than pick up a few brochures from employers at Hinds Community College’s 2016 District Job Fair on April 13. The Diesel Technology student from Jackson asked…
By: Danny Barrett Jr.

Logan Wilson did more than pick up a few brochures from employers at Hinds Community College’s 2016 District Job Fair on April 13.

The Diesel Technology student from Jackson asked the kinds of questions he’ll likely want to file away for job interviews in the future – the hope many of the 300 or so Hinds students at the event, held in Mayo Gym on the Raymond Campus. 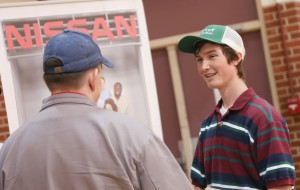 “I asked them questions about their retention rate and the number of employees they have,” Wilson said after chatting up representatives at the Nissan North America table at the expo-style event that featured about 40 public and private-sector employers.

Career and technical fields such as automotive, hospitality and sales were among booths, along with mainstays in the healthcare, foodservice, gaming and temporary employment service areas.

“I just want to get my foot in the door in my field,” said Garrett Adcock, a Diesel Tech student from Byram, gathered around the Goodyear table with fellow students in the program, including Bronson Devine, of Jackson.

“I’m going to all the ones in the field I can, like MDOT, UPS, Goodyear,” Devine said. 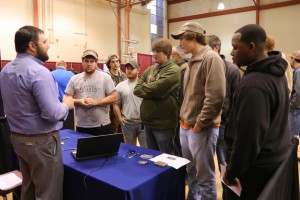 Students speak with Russell Branch, of Goodyear Commercial Tire, at Jobs for Eagles, a job fair on the Raymond Campus for Hinds students, on Wednesday, April 13, 2016. The Diesel Technology students are, from left, Garrett Adcock, of Byram; Hunter Tisdale, of Brandon; Trent Craft, of Magee; Noah Christy, of Byram; and Bronson Devine, of Jackson. (April Garon/Hinds Community College)

Rising through the ranks with enthusiasm is real for Ashlyn Ervin, of Brandon, marketing coordinator for MVP Sonic, which operates the fast-food chain’s location in Raymond. She told students at her table of her own rise from an hourly manager at the popular chain to marketer in less than two years. 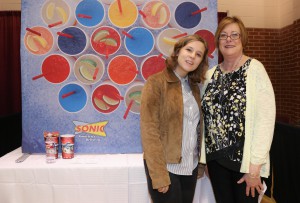 “They were impressed with my enthusiasm for Sonic,” Ervin said. “My job is a combination of everything I love, Sonic, creativity, making people happy, and having fun.

Kalaishi Johnson, a Psychology major on the Raymond Campus, was drawn in by promos for United Brands, which manufactures foodservice equipment and needs welders and similarly-skilled labor. 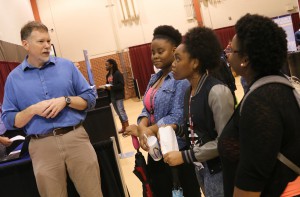 Students speak with Dusty Gray, production manager for Unified Brands, at Jobs for Eagles, a job fair on the Raymond Campus for Hinds students, on Wednesday, April 13, 2016. From left: Princess Jones, an English Education major; Kalaishi Johnson, a Psychology major; and Cierrow Russell, a Communications major. All are from Jackson. (April Garon/Hinds Community College)

“It caught my eye, with all the pictures of foodservice they have,” she said.

Dusty Gray, the company’s production manager, and Carolyn Bratton, its human resources manager, both Hinds alums, said the company participated in this semester’s fair because of the college’s workforce development programs.

“We’re seeing that we are having to rebuild those skills in the workforce that have gone away,” Gray said.