Honoré ends M2M summit with challenge to ‘take on the impossible’

Doing the impossible is something retired Army Lt. Gen. Russel L. Honoré has made look easy in uniform and in post-military life. 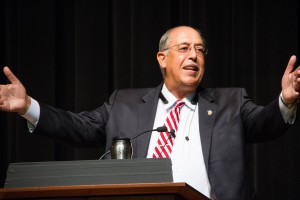 “Don’t be afraid to take on the impossible,” Honoré said to a packed main arena Tuesday at Hinds’ Clyde Muse Center on the Rankin Campus. “I was the proverbial C-student. My mama couldn’t read, my daddy could only read a little bit.

“C-students like me, you gotta hustle,” Honoré said. “You’ve gotta use every gift God gave you to make it. There’s no reason or excuse not to make it. I made it because I didn’t let anyone around me outwork me. And I’m not going to settle for your excuses.”

Honoré, best known for his efforts to restore order in New Orleans as head of Joint Task Force Katrina following the devastating 2005 hurricane, spoke on the virtues of self-discipline and perseverance during the final hour of the summit, themed “Preparing African American Males for Success in the 21st Century”. A recurring theme in his address was preparing the current generation of high school and college students to be world leaders through basic skills.

“When I was growing up, people fought to be able to ride on a bus,” he said. “We won the right to get on the bus, and now we’re the people who drive all the buses. You know what job we want this century? We want to own the bus.” 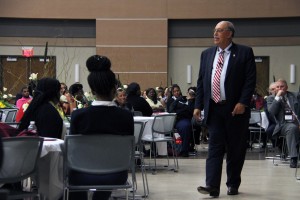 Born in 1947 as the youngest of 12 children in Pointe Coupee Parish, La., Honoré, an African-American who identifies as Creole, enlisted in the Army in 1971. By 2004, he was a three-star general and oversaw deployment of National Guard divisions heading to Iraq and Afghanistan. Three years after leading the Katrina effort, he retired, and in 2009 authored the book, “Survival: How a Culture of Preparedness Can Save You and Your Family from Disasters and Leadership in the New Normal.”

In 2012, a program similar to Hinds’ M2M Initiative was established in Louisiana by Honoré’s alma mater, Southern University. As with M2M, it is geared to increase college graduation rates of minority male students.

Literacy is the most vital basic skill the current generation has to tackle issues on the national and world stage, Honoré said, seasoning his remarks with the use of the Army’s oft-shouted cheer, “Hooah!”

“In the State of Louisiana, one of the largest concentrations of black men is in prisons,” he said. “There are cities in America that assess the reading level of fourth-grade, 10-year-old males to determine how many prisoners they’ll have in 20 years. They have the formula. Because if you can’t read by the time you’re 10 years old, you’ll have a 40 percent chance of having a run-in with the law by the time you’re 14. I didn’t make that up; it comes from the Children’s Defense Fund.

“We’ve got people graduating from high school now who can’t read. And they’re showing up in colleges. I challenge every teacher in here. I don’t care what the test says. These children need to know how to read. If they can’t read, I don’t care how many computers we give them. Life will mean nothing to them.” 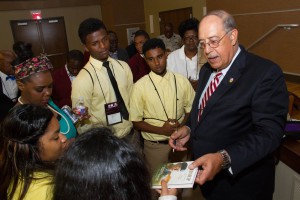 Retired Army Lt. Gen. Russel L. Honoré accepts a copy of his 2009 book ” “Survival: How a Culture of Preparedness Can Save You and Your Family from Disasters and Leadership in the New Normal” for high school students in the Minority Male Initiative. Honoré gave the closing address at the M2M program’s Best Practices Summit that ended Tuesday.

Slides during his address showed a Model of Excellence triangle and the iconic depiction of Gen. George Washington crossing the Delaware River during the American Revolutionary War, which he used as an example of winning the battles of life against long odds.

“Competence, confidence, discipline – that’s what creates excellence,” he said. “Discipline is what we do when nobody’s watching, and you do the right thing. It’s that little voice in the back of your head. Knowing what to do and having the initiative to do it when nobody’s looking is how we create excellence.”

“But, we sit here today at Hinds talking about an enduring problem we’ve had for 239 years we’ve yet to resolve. The good news is we’re talking about it and we’ve given you an action plan for success. That action plan is you. The only one who will determine your success is you.”

“We need you to be prepared to take on the impossible,” he said. “Previous generations did it. They fought and won our freedom when they were not free themselves.”