"As an HBCU, we try to remind the entire campus community of our roots and the importance of what has happened here and what continues to happen."
By: Paisley Boston
Photography: Brad Smith 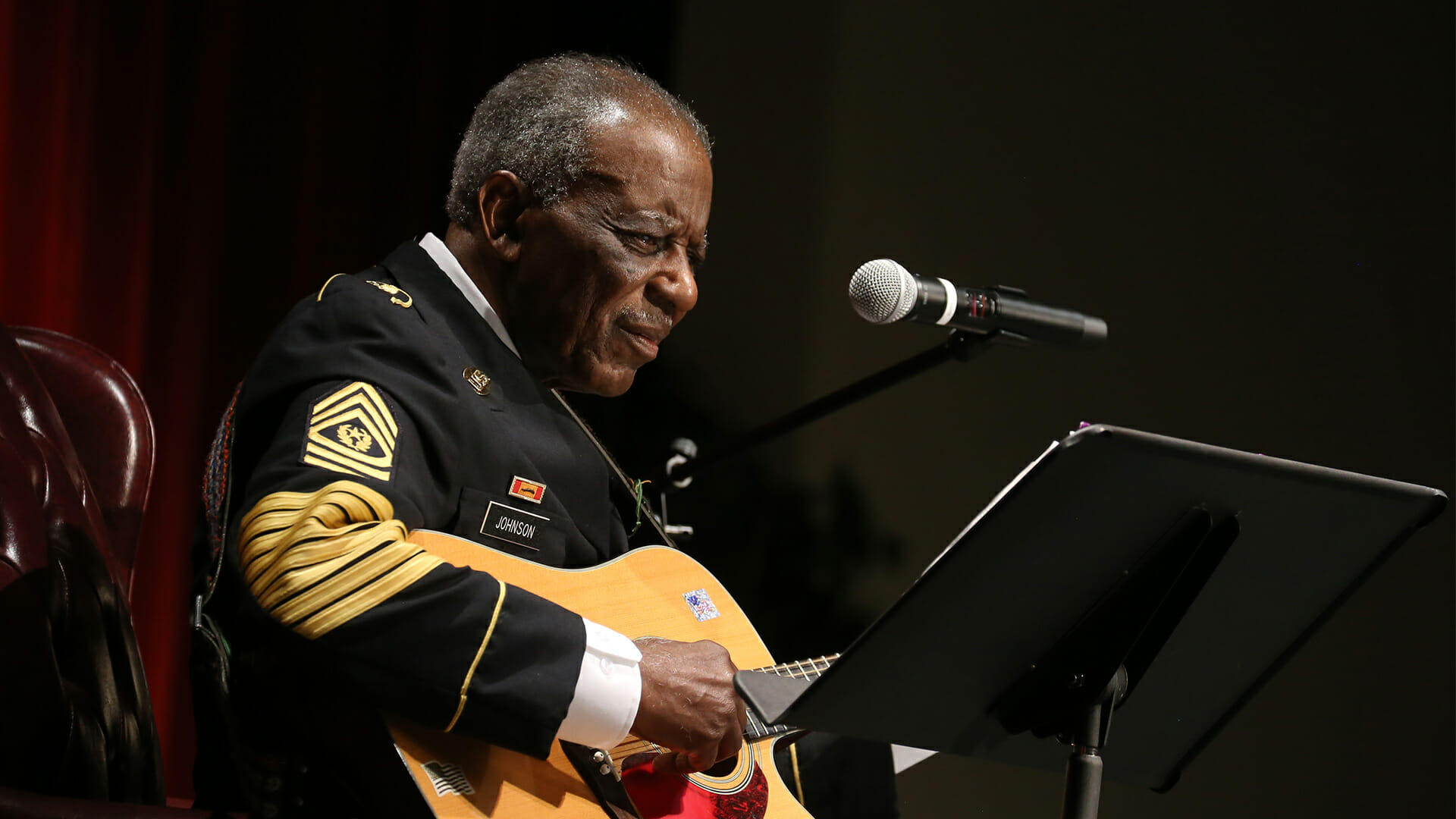 Command Sgt. Maj. Robert Johnson Jr.’s guitar helped him deliver a message during his talk in the annual Holtzclaw Lecture Series on the Utica Campus on Oct. 26.

Johnson, 83, a Utica native and 1958 graduate of Hinds County Agricultural High School, used the platform to expound upon the true definition of a veteran and the life experiences that led him to become one of the highest-ranking officers in the military.

“There is not one single instance that made me a veteran,” Johnson said. “I have had multiple motivators that shifted my mindset and motivated me to become the man that stands before you today.

“When I was in middle school, one of my peers often referred to me as Robert ‘Couldn’t Make It If He Tried’ Johnson. The words he thought would discourage me actually motivated me to work harder.”

In 2002, Johnson was featured in Harold Hunt’s book titled “100 Sergeants Majors of Color: Black Americans Who Paved the Way for Others to Follow,” a tribute to the historical contributions of soldiers of African-American descent who achieved the highest enlisted rank in the military.

Although Johnson’s reputation proceeds him, the invitation to serve as a lecturer for the series was by happenstance.

“I received a phone call from a gentleman requesting to tour the museum, which was not unusual, but when he asked if he was allowed to bring in his guitar, I was a bit puzzled,” said Jean Greene, co-director of the Utica Institute Museum. “Before touring the museum, Mr. Johnson played his guitar for us and sang his life’s history. We were so thrilled that he was willing to come back; he is the first military personnel to present during the series.”

The Holtzclaw Lecture Series brings nationally recognized scholars and experts on African American education in the South for public lectures in various venues around the state. This lecture is co-sponsored by Hinds, the National Endowment for the Humanities, the Mississippi Humanities Council and the Mississippi College School of Humanities, with major funding from the National Endowment for the Humanities.

Museum Co-Director Dan Fuller said the series allows the community to come together and learn “where we have come from and where we are going.”

“As an HBCU, we try to remind the entire campus community of our roots and the importance of what has happened here and what continues to happen,” he said.

After entertaining questions from the audience and paying homage to Mississippi Blues and Country singers, Johnson concluded the lecture with an encore performance of How Great Thou Art, written by Stuart K. Hine.

For more information about the Holtzclaw Lecture Series, contact co-directors on the Utica Campus, Dan Fuller, at Daniel.Fuller@hindscc.edu or Jean Greene at JBGreene@hindscc.edu.