But on Sept. 1 all could call Hinds Community College President Dr. Clyde Muse honored as he was presented with the prestigious Winter-Reed Partnership Award by former Gov. William Winter, a man Muse referred to as his friend and hero. 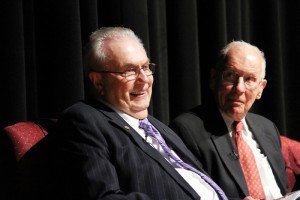 Muse was given the eighth annual award by the Mississippi Association of Partners in Education at a gala celebration at Hinds Community College’s Rankin Campus facility that bears his name, the Clyde Muse Center.

More than 350 packed the Muse Center to pay tribute, including elected officials, college officials and more than 30 members of Muse’s immediate family. The stage was decorated with a child-sized pedal John Deere tractor and farm vegetables, a nod to the real tractor that Muse owns and his favorite gardening hobby. Among the reception table decorations were watermelons carved with Muse’s face and those of Winter and Reed.

Winter presented the award to Muse “for your contributions for education in Mississippi and for your distinguished career and your life of service to the people of Mississippi.”

Winter also read remarks from Tupelo businessman Jack Reed Sr., who was not able to be present.

“My first impression of Clyde Muse is he is a big man with a big heart.  As big as he is, his love for public education is even bigger,” Reed said in the remarks Winter read. “Congratulations to the godfather. Thank you for putting your broad shoulders to the wheel of public education. “

Former Itawamba Community College President Dr. David Cole has been credited with giving Muse, Hinds president since 1978, the nickname “godfather” as the dean of higher education in Mississippi.  It’s a name that has become synonymous with Muse.

“I call him a mentor, and a colleague and a very dear friend,” said colleague Dr. Williams Lewis, president of Pearl River Community College. “I don’t think there is another individual who has contributed more in his or her lifetime than Clyde Muse has to the success of not just Hinds Community College but to our educational system, both higher education and K-12, as well.”

Dr. Mark Keenum, president of Mississippi State University where Muse received two advanced degrees, said he knows of no one more deserving of the award.

“Dr. Clyde Muse has done as much as anyone in our state to encourage and expand access and participation in education, which is perhaps the greatest need in our state,” said Mississippi State University President Dr. Mark Keenum. “Our community college system is the best in the nation, and the dedication and leadership Dr. Muse has provided at Hinds and statewide over more than 35 years is one of the reasons why.”

Mistress of ceremonies Jackie Granberry, Hinds vice president for Advancement, noted that Muse has been an educator for 63 years, but that may not be his biggest contribution.

“Certainly, he has influenced public policy, has developed innovative programs and has brought groups together to build consensus that has definitely made public education better in Mississippi,” she said. “However, I believe the greatest influence that he has had on our state has been the literally thousands of people he has mentored along the way.  His influence will continue to trickle down through these people.”

One of those he influenced was Carla Nicks, the first African American Miss Hinds Community College in 1989. Nicks, who calls Muse “Papa,” recalled that her future could have been bleak as a child of a single mother. But both Clyde Muse and his late wife Vashti Muse, who taught reading at Hinds Community College, took her under their wing.

“I had seen this tall, regal man walking around campus often and watched him from afar as he engaged with other students everywhere he went,” Nicks said. “And he never changed his gentle hand toward any of them. It didn’t matter what economic condition their life was, where they came from.  It didn’t even matter the color of their skin. He treated mankind as our heavenly father looks and treats his children.”

Educator Dr. Jackie Wofford was a member of Muse’s Starkville High School basketball team in 1961, the year the team won the state championship. Wofford said he will always call Muse “Coach Muse,” and when he calls Muse’s office he always says number 25 is calling.

“He has helped many thousands of young people, and I’m just here as a personal example of this, how he has impacted me as he has impacted and influenced many of you,” Wofford said. “As a coach he fostered our ability as a team to play together.  To be the best we could be . He never talked down to us, he never cursed us. He was firm with us. We knew where he stood when we went to basketball practice. The result was that example he made as a father, coach, principal, teacher.”

Dr. Suzanne Bean, president of MAPE, said it was an honor to recognize Muse as an education hero.

“Dr. Clyde Muse was a most worthy honoree of the Winter-Reed Partnership Award.  His legacy is firmly established as a passionate leader in the field of education.  His impact on hundreds and thousands of people over the years was so apparent during the many tributes offered in his honor,” she said.