The Hinds Community College Wind Ensemble will perform two programs in preparation for the group’s trip to France in May. The concert will include patriotic selections and works by Mississippi composers.

The Hinds Wind Ensemble will perform in France May 14-21 through the American Celebration of Music in coordination with the U.S. Department of Defense. This concert series will be part of the 70th Anniversary “Commemorations of D-Day: The Battle of Normandy and the Liberation of France.” Invited music ensembles will be recognized in France for their participation in this once-in-a-lifetime opportunity.

Fifty-two Hinds students and eleven faculty will make the trip to France for three performances by the Hinds Wind Ensemble, Jazz Ensemble and Brass Quintet. 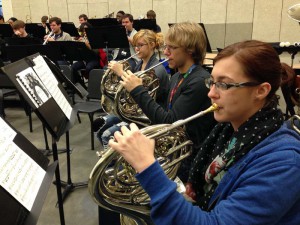 The first concert is 7 p.m. Feb. 27 at Cain-Cochran Hall on the Raymond Campus. Selections include John Williams’ “The Star Spangled Banner,” which was composed for the 2004 Rose Bowl; “Solas Ane” by Samuel Hazo; “Beyond Whistler” by Ralph Ford; “Chant Funeraire” by Gabrielle Faure, commissioned by the French government for the centenary of Napoleon Bonaparte’s death; “On a Hymnsong of Phillip Bliss” by David Holsinger and “The Stars and Stripes Forever” by John Philip Sousa.

The second concert is 7 p.m. April 24, also at Cain-Cochran Hall on the Raymond Campus. The selections are “Crown Imperial” by William Walton, arranged by W.J. Duthoit; “Hymn to the Fallen”, from “Saving Private Ryan”, by John Williams; “Fanfare for the Common Man” by Aaron Copland; Columbia-Eagle March by Mississippi composer James Sclater; “Savor the Last Dance” by Mississippi composer Tyler Griffin and “One Life Beautiful” by Julie Giroux.

Admission is $5 each for the concerts