Hinds CC welcomes alumni back to campus for day of fun, memories

RAYMOND – It was so familiar, yet so different for five old friends who visited the Raymond Campus last Saturday for the first time in more than 40 years. “It…
By: Danny Barrett Jr.

RAYMOND – It was so familiar, yet so different for five old friends who visited the Raymond Campus last Saturday for the first time in more than 40 years.

“It was the best memories ever for us,” said Connie Wicks Rice, of Foley, Ala., among a group of fellow former cheerleaders and Hi-Steppers who visited campus during the Calling All Eagles tailgate party that welcomed alumni across several fields of study and play back to their old stomping grounds. “Seeing the changes on campus since then has been amazing.” 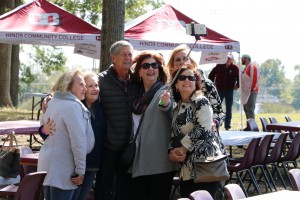 Rice; Merrill Mitchell, of Dauphin Island, Ala.; Lee Ann May, of Brandon, Margaret Patterson Luckett, of Oxford; and Keith and Vickie Gilmore Neely, of Florence, braved chilly air outside to tour campus, check out buildings that weren’t around 40 years ago and catch up with others they hadn’t seen in a while. They hadn’t been on campus since 1971, but reconnected on social media after finding out about the tailgate party.

“I can remember when the girls couldn’t wear miniskirts and had to return to the dorm by 4:30 every day,” Mitchell said. “But, we’ll recreate some of our old photos we used to take around here.”

Alumni groups from past cheerleading squads, Hi-Steppers, football, Eagle band, Montage Theatre of Dance and homecoming courts and joined those from Phi Theta Kappa, Baptist Student Union and others for a day of fun, food and fellowship before the Hinds Eagles took to the gridiron against East Mississippi Community College.

“I absolutely loved coming here,” said Ann Forbes, of Windermere, Fla., a former Miss Hinds during her days attending the college in 1986-87. “I used to stay in old Davis Hall here, but of course now there’s more buildings now and they’re newer.” 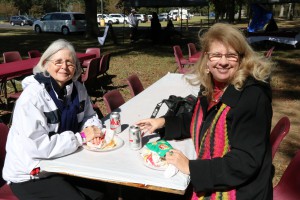 On display for tailgaters were items from a time capsule buried in 1992 for the college’s 75th anniversary and unearthed Oct. 25 to celebrate the college’s Centennial. Letters from faculty, national magazines, a soda can and bumper stickers from that year’s presidential election were among those preserved.

“I can remember my uncle, aunt and other family all split their votes that year,” said Tim Krason, English instructor and Honors Institute advisor.

About 35 alumni band members returned to play during halftime with current members and were among those recognized. A few old band mates from the 1970s and ‘80s marveled at the spacious band hall of today as their minds drifted back in time.

“The band hall used to be on another part of campus, so I can only imagine what it would have been like in here,” said Linda Bullock, who played clarinet in her student days.

As is often heard in multiple circles of friends who attended Hinds, the feeling of family back then and now is still strong.

“I’m part of a group who comes back each time for different things,” said Beth Barlow, a sax player and frequent participant in alumni events. “It’s always like family coming back.” 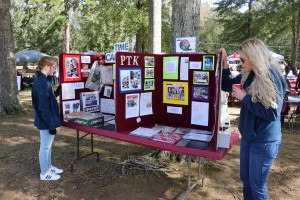 [tweetable alt=””]Hinds CC welcomes alumni back to campus for day of fun, memories[/tweetable]