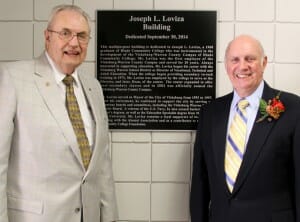 The multipurpose building at Hinds Community College’s Vicksburg-Warren Campus was named for the administrator who helped the campus become what it is today, beginning 40 years ago in 1974.

The Joseph L. Loviza Multipurpose Building was named on Sept. 30 after the former Vicksburg Campus dean and former mayor of Vicksburg.

“When the Hinds Community College Board of Trustees and the college decide to make a decision to name a building in honor of or memory of an individual, it is a decision made with deliberate thought,” said Robert Pickett of Vicksburg, president of the Hinds Community College Board of Trustees. “The leadership provided by Joe Loviza in creating a college branch, and later a comprehensive college campus here to serve the people of Vicksburg and Warren County, certainly fits the expectations of our board when honoring outstanding contributions.”

Hinds President Dr. Clyde Muse said the campus started out as a high school career and technical education program, which called for a change in state law to be allowed at a community college.

“It set the example for the future,” Muse said. “This campus continues to be one of the largest career-technical programs for high school students in the state. That kind of effort just doesn’t go and happen. It takes a lot of hard work on the part of this community as well as others. We have had, over the years, the kind of leadership that it takes to make a full comprehensive community college campus in Vicksburg.”

Loviza said the campus “is the best investment you’ll ever make because you’ll have an immediate return on your tax dollar,” he said. “It’s not just Joe Loviza. Although I’m glad for my name to be up there, I had a lot of help getting here.”

Loviza is a 1960 graduate of Hinds Community College and was the first employee of the Vicksburg-Warren Campus, serving for 20 years.

He began his career with the Vicksburg Warren School System as director of Vocational, Technical and Adult Education. When the college began providing secondary vo-tech training in 1973, Loviza was employed to serve as the director, and later, dean, of the center. The center expanded to offer post-secondary classes and in 2002 was officially named the Vicksburg-Warren Campus.

Loviza served as mayor of the city of Vicksburg from 1993 to 1997. After his retirement, he continued to support the city by serving on numerous boards and committees, including the Vicksburg Warren School Board.