Student is among 44 from 34 HBCUs nationwide selected
By: Danny Barrett Jr. 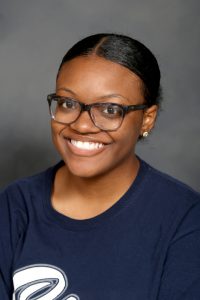 As part of the honor, Chambers, who is studying biology and will pursue medical school, will participate in the 2019 National HBCU Week Conference Sept. 8-11 in Washington, D.C.

Thirty-four HBCUs nationwide are represented on this year’s list, comprised of undergraduate, graduate and professional students. All are recognized for their accomplishments in academics, leadership and civic engagement.

Chambers was inducted into the Alpha Beta Xi chapter of Phi Theta Kappa on campus and is part of the campus’ Science, Technology Engineering and Mathematics Undergraduate Program (STEM-UP) Academy. She is also secretary of the William H. Holtzclaw History Club and editor of the Uticanite yearbook.

“I was a little shocked when I first found out about the honor, since many of my friends were also nominated,” Chambers said. “But, it’s a great opportunity for me to branch out by myself and meet new people who might eventually help me in my career. Coming to Hinds has been the best decision I’ve ever made. It’s given me more time to interact with teachers and other students.”

Scholars were selected from among several highly distinguished HBCU students chosen based on their academic achievement, campus and civic involvement and entrepreneurial ethos or “go-getter” spirit. In the course of their one-year term, Competitiveness Scholars will learn and share proven and promising practices that support individual and institutional achievement, with the goal of strengthening prospects for career and life success.

“I am extremely excited to hear of Adrianna’s selection for the 2019 HBCU Competitiveness Scholars initiative,” said Jonathan Townes, assistant director of Sponsored Grants for the Utica Campus. “Ms. Chambers continues to strive for excellence inside the classroom and consistently provides service outside of the classroom. I am certain that she will use this opportunity to not only grow as a student but to guide current and future Hinds students to success.”

Chambers’ participation in this fall’s White House Initiative should prove to develop her abilities on top of what she’s already doing in school, said Dr. Noel Gardner, her chemistry instructor and adviser.

“I know firsthand of her work ethic, goals, aspirations and her charismatic personality,” Gardner said. “I know she will use this opportunity to reach her full potential and to help others reach theirs.”

In addition to attending the conference, Chambers and other All-Stars will take part in workshops designed to strengthen leadership skills and encourage them to seek ongoing personal and professional development opportunities in innovation and entrepreneurship.