The building underwent a massive multi-million dollar renovation and took four years to complete. The student center is home to Student Services and dining areas, as well as computer labs, financial aid and the campus bookstore. 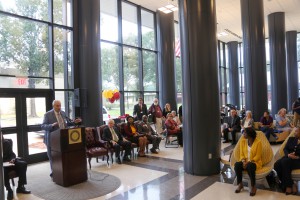 Renovations on the building began October 2013 and concluded this summer. The $5 million project was funded by the Title III, Part B Strengthening HBCUs funding formula.

In his remarks, Jackson noted that the facility will serve three main purposes: To recruit and retain students, promote the “third space” concept, which is learning outside the classroom, and serve as a catalyst for student success. 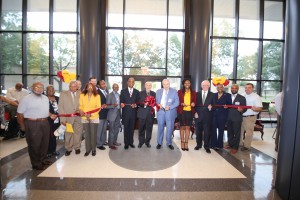 Hundreds of students and staff, as well as guests toured the 21,066-sq.-ft. building enjoying live music and food.  Patrons were allowed to visit labs and offices, the bookstore and the many dining areas. Decked out with new furniture and creative amenities, the renovated student union received rave reviews from all in attendance.

“This building will be important for our students and will serve the campus well. You won’t find a facility of this kind more beautiful and functional then this building. We’re very proud of the outcome,” said Hinds President Dr. Clyde Muse.

The student union was dedicated on March 19, 1998, to J. Louis Stokes, the sixth and final president of Utica Junior College. Stokes held the position during the college’s merger with the Hinds Junior College District in 1982. From 1987-1993, he was vice president for Continuing Education and Community Services. From 1993 until his retirement in 1997, he served as executive assistant to the president for special projects. 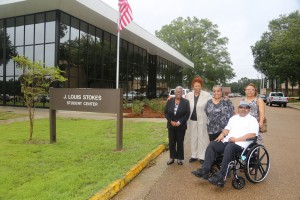 Family members of J. Louis Stokes’ family outside the building named in his honor at Hinds Community College’s Utica Campus.