PEARL– Agencies who partnered with Hinds Community College to build a new entrance to the Rankin Campus’ Career-Technical Building heard thanks from one of the nearly 300 students who attend…
By: Danny Barrett Jr.

PEARL– Agencies who partnered with Hinds Community College to build a new entrance to the Rankin Campus’ Career-Technical Building heard thanks from one of the nearly 300 students who attend classes in the building during a ribbon-cutting and program Friday, Nov. 18. 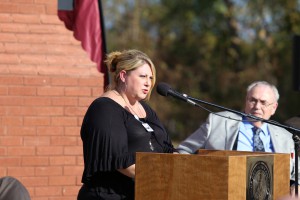 “There’s a large amount of commercial traffic with the businesses on that road,” said Heather Long, a third-semester Associate Degree Nursing student at the Rankin Campus, during the brief program to officially unveil Community College Boulevard, off Greenfield Road. Long, also president of the Student Nursing Organization at the campus, referred to Commercial Park Drive, which is how students and instructors got to class previously.

“Forklifts and 18-wheelers use it daily, which causes a lot of wear and tear on the road itself,” Long said. “This made for a very bumpy ride for students traveling to and from campus every day. I’d like to thank all the agencies and partners that came together to make this boulevard a reality. This is definitely more attractive and much easier to maneuver.”

Hinds purchased the Career-Technical Building in December 2008 and began classes in 2009. At the time, it was the United Association of Plumbers and Pipefitters Gulf Coast Regional Training Center. Built in 2002, the two-story, 40,000 square-foot building sits on five acres about five miles from the main Rankin Campus off Highway 80.

“This entrance was something that was critically needed by students, faculty and people who visited,” Hinds President Dr. Clyde Muse said. “We have nearly 300 students in career and technical programs in that building.”

Muse also credited state Sen. Dean Kirby, of Pearl, with making the new boulevard a reality. The senator played an instrumental role during the 2008 Legislature to support a special appropriation to help the college purchase the building. 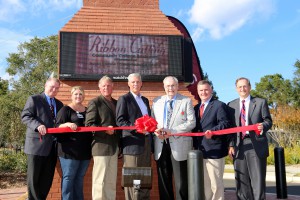 Officials at the event said another big key to building the road was local government and college working together to do so and still accommodate city and county infrastructure.

“Dr. Muse summed it up – that we all worked together,” said Jared Morrison, president of the Rankin County Board of Supervisors. “I think that’s what sets Rankin County apart, and why we’re growing the way we grow, is that everybody works together.”

“This is absolutely the best thing that could have happened,” Pearl Mayor Brad Rogers said. “It’s a great boulevard, beautiful entrance. And it’s nothing short of what Hinds Community College usually does, and that’s top-notch, A-1 work.”