Program April 2 to honor Hinds sports hall of famer and two-time academic instructor of the year
By: Danny Barrett Jr.

RAYMOND – The Hinds Community College tennis courts on the Raymond Campus will be dedicated and named April 2 in honor of Dr. Cleon McKnight. 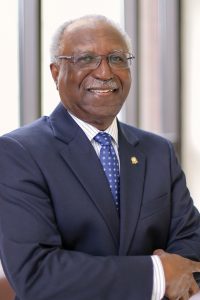 A program marking the dedication begins at 1 p.m. The public is invited.

McKnight retired in 2001 after 32 years as a tennis coach and chemistry instructor on the Utica and Raymond campuses.

Under his leadership, the men’s and women’s teams became national powerhouses, combining for a record of 430-49 by the time he retired. His men’s teams won nine state and eight regional championships to go along with five undefeated seasons, while his women’s teams won eight state and regional titles each, plus four undefeated seasons. He won coach of the year honors 50 times from four different organizations during his career.

Twice, he received the Academic Achievement Instructor Award, in 1992 and 1999, and was named Academic Instructor of the Year in 1992 by Phi Theta Kappa. In 2009, he was inducted into the Hinds Community College Sports Hall of Fame.

CATEGORIES: Raymond Campus
← Hinds CC Vicksburg-Warren Campus programs on display in expo All the galaxy a stage for Hinds CC alum thanks to Disability Support Services →