Andre’a Gaston had faced challenges before enrolling in truck driver school – mainly being a mother to two daughters and a son.

Driving a manual shift transmission turned out to be a close second in that category, but now she’s certified and bona fide to take on the road.

“At first, I thought my age would prevent me from doing it and the fact I’m a female. I had not driven a stick shift vehicle in my life, and I’m 44!,” Gaston said Thursday during a ceremony in which Hinds Community College received $220,000 from the Walmart Foundation to support the training of more women and underserved populations who enroll in the driver’s academy at KLLM Transport Services. 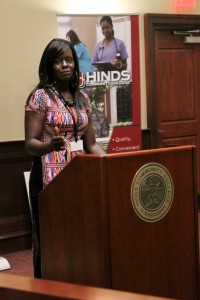 Andre’a Gaston, who earned her commercial driver’s license (CDL) at the KLLM Driving Academy, speaks Thursday during a ceremony to present Hinds with a $220,000 check from the Walmart Foundation to train more women truck drivers.

“My entire family is proud of me for taking this big step and doing what no one thought I could do,” Gaskin said.

The Grenada native credited instructors at the firm’s driving academy for helping her secure her commercial driver’s license last week.

“I had my days where I had trouble. But they’re determined. They stick with you and make sure you get it. Anyone who wants this job, it can be done. You’ll have the backing for it from every single teacher and instructor.”

The money, part of a larger $100 million commitment by the retailer to bolster workforce training, education and career pathways for retail workers nationwide, will support training women and underserved populations who enroll in the driver’s academy at KLLM Transport Services. The money comes to Hinds via the Jackson-based Foundation for the Mid South. 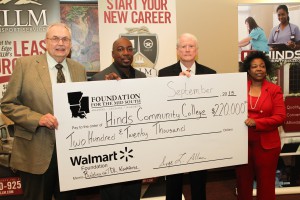 “Walmart supported us in this plan to expand opportunities to all folks, but gave us a challenge to do it women,” said Ivye Allen, president of Foundation for the Mid South. “I’m glad today to see females represented here in this profession.”

Diane Smith, one of Gaston’s driving instructors, could attest to her own life-changing achievement. She began driving trucks nearly 20 years ago and ran her own business.

“At first, I didn’t want to be a truck driver because of what people would think of me,” Smith said. “But I did it to provide for my family.”

She started her career at KLLM and was eager to return to KLLM for the opportunity to help other women earn their CDL and become financially secure. 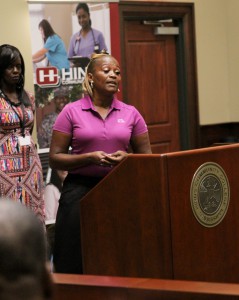 Diane Smith, at podium, speaks at a ceremony Thursday to present Hinds with a $220,000 check from the Walmart Foundation to train more women truck drivers. Smith has been a licensed truck driver for nearly 20 years. At left is Andre’a Gaston, who earned her commercial driver’s license last week.

Hinds’ partnership with KLLM to train truck drivers at the company’s Richland headquarters and boost their ranks began in fall 2012. KLLM handles the training. Hinds handles the coursework. The facility itself opened in March 2014.

“Basically, one of our goals at the company is to make sure we have a person in all 3,000-plus trucks we currently have,” said KLLM vice president Kirk Blankenship.

Hinds President Dr. Clyde Muse said the funds enhance the partnership’s initial goal of helping train the state’s overall workforce and taps into a growing segment of the student population at Hinds.

“Now, with the Walmart Foundation and the Foundation for the Mid South, we have a secondary goal, and that is to increase the number of female drivers,” Muse said. “Our student body now consists of 65 percent females, so there’s great fertile ground out there to find female students.”

A mix of grants and other investments from Walmart and its philanthropic foundation are part of the Opportunity Initiative, rolled out earlier this year. It will spread the funds over five years to help retail workers across the industry advance careers and achieve greater economic mobility.

“The big focus is on women’s empowerment,” said Tice White, of the Walmart Foundation. “So to hear this provides support to women in retail and transportation sectors and is so important to our community.” 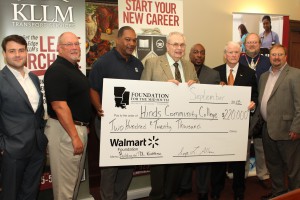 “The training of a driver student like this that will use our transportation system certainly gets my attention,” Hall said.