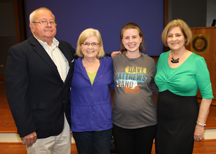 She learned she was the recipient of the Carla McCulloch Scholarship, awarded each year to a Hinds second semester nursing student to help pay for the second year of school.

Collins, 32, and her husband, a paramedic, are also expecting their first child in April — about two weeks before the end of the semester. They had been told they wouldn’t have any children so the pregnancy was a complete surprise, especially since they learned of it at the beginning of Collins’ first semester of nursing school.

Collins said she decided to become a nurse because “it was something I had a calling for.  I was at the point in my life when I needed to do something that was a passion and not just a job,” she said. “I had had a lot of family members who had been sick and I lost friends in colleges. I just became very aware of how a medical professional can make the difference in a patient’s recovery.”

In order to enroll in nursing school, she quit her job, and she and her husband sold their house and moved in with her parents. She is a student in the nursing program in the Rankin Campus Career-Technical Building off Greenfield Road in Pearl.

The scholarship is awarded each year to a second semester student in the Associate Degree Nursing program at Hinds Community College.

The scholarship was created by Larry and Carol McCulloch, formerly of Magee but now residents of Roanoke, Va., in memory of their daughter Carla, a Simpson Academy graduate who was a Hinds nursing student at the time of her death in an April 1991 accident.

“When I read about her, she sounded extremely familiar,” Collins said.

The McCullochs each year personally present the scholarship and keep tabs on recipients. This year, seven other family members attended as well as a former Hinds classmate, Lynn McKee of Clinton, who knew Carla in 1991. Family members included Al and Linda McCulloch of Ackerman, Larry’s brother and his wife; Carol’s niece Julia Cannon of Fulton; Carol’s sister, Robin Greenlee of Kilmichael; Pat and Lori Smith of Lester, Ala., Carol’s sister and brother-in-law, and their daughter Mandy Smith.

“We look forward to this all year long,” said Larry McCulloch. “The scholarship just keeps going and going.”