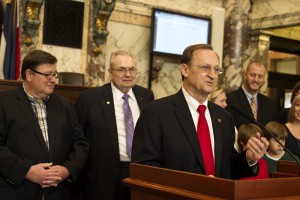 Flanked by members of his family, Hinds President Dr. Clyde Muse smiles as state Sen. Dean Kirby, R-Pearl, explains the purpose behind the resolution honoring Muse as a creator of T-ball. 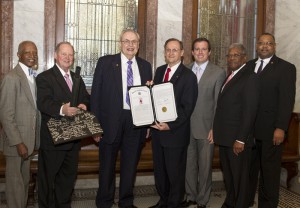 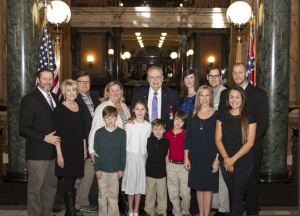 Hinds President Dr. Clyde Muse and his family at the state Capitol.

Hinds Community College President Dr. Clyde Muse was honored with a state Senate Concurrent Resolution on March 27 for his role in the invention of the game of T-ball.

The effort was led by Sen. Dean Kirby, R-Pearl. “Clyde Muse has been honored many times by the Legislature, and will be honored many more times, I’m sure,” Kirby said in introducing the resolution from the floor of the state Senate. “Dr. Clyde Muse is being honored today in a light-hearted but very serious way.”

Kirby noted that the game of T-Ball has brought a lot of joy to not only kids but to their parents and grandparents. “T-ball is a lot of fun. It’s one of the great things that Clyde Muse brought to us. We’re so grateful for that. That is something that is a minute part of his life but it’s one of the many things he brought to us that we really and truly appreciate.”

Muse helped bring about the game when he and a colleague were looking for a way 8- and 9-year-old boys who don’t have the developed eye-hand coordination could participate in baseball. Now the game is played by preschoolers worldwide.

“I’ve had one original idea in my life,” Muse told senators, laughing. “The first game we played I knew it was going to be a tremendous success. I saw how much fun the little children have.”

Muse said the game was never patented. “I didn’t have enough sense to do that,” he said.

Below is the text of the resolution:

WHEREAS, the game of T-Ball, which is now played worldwide, was conceived by two men in Starkville, Mississippi.  One of these men grew up in Sebastopol, played basketball at East Central Junior College, is recognized as an outstanding educator, and now serves as the President of the largest community college in Mississippi; and it might not be surprising to know that he still maintains a keen interest in sports; and

WHEREAS, Dr. Clyde Muse, now President of Hinds Community College, remembers coming to Starkville when he was a coach in 1957 and working with the summer program of Boys’ Little League Baseball.  Many volunteers were involved, including the Executive Committee of the Starkville Junior Baseball Association, the volunteer coaches of individual teams (usually dads of the players), volunteers who ran concessions (usually moms or wives of coaches), businesses which provided shirts and equipment, and younger or older family members who helped with mowing and field preparation.  These energetic volunteers helped make the program a big success; and

WHEREAS, the T-Ball story (originally written as tee-ball) actually began with the sponsorship by the Rotary Club in 1951 of the Starkville Junior Baseball Association and the appointment of a few member volunteers as an executive committee to set policies for summer baseball play by young boys in Starkville.  Four teams and 36 boys, ages 10-12, were involved the first year, and regular baseball was played.  As the T-Ball program grew, money became available through Rotary sponsorship, city help, and boys’ fees to hire coaches to handle daily activities as a summer job; and

WHEREAS, by 1960, the people involved, especially Dr. Muse and Professor Littlejohn, a Mississippi State University Accounting Professor, felt very strongly that eight- and nine-year-olds needed to be involved in the program.  But the rules of the game in regular baseball meant that too much game time would be spent by a young pitcher trying to get a good pitch across the plate and by a young batter trying to muster eye and muscle coordination enough to hit it.  They needed to make the game interesting and provide the right experience for boys who needed to be ready to play in the Little Boys Minor League at age ten.  Dr. Muse recalls sitting in Professor Littlejohn’s office discussing how the game might be modified to overcome those problems and involve the eight- and nine-year-olds.  The result was a stationary ball, instead of a thrown pitch, and a much shorter game.  The two of them discussed and wrote the original T-Ball Rules and then presented them to the Executive Committee of the Starkville Junior Baseball Association, which endorsed and proceeded to implement them in the summer of 1961; and

WHEREAS, infield players have the same positions as in regular baseball.  Everyone else played in the outfield and all had a turn at bat.  Only one swing at the ball was allowed; either the ball was hit, or the player was out.  Games were five innings, and no inning was started after an hour of play.  The field overall was smaller.  Eight- and nine-year-olds played on separate teams.  No official score was kept, and no after-season championship games were played.  This was designed to emphasize sportsmanship and fun of the game and to recognize the potential of each player on the team.  Boys who were at least eight, but younger than ten, by July 31 could sign up and play; and

WHEREAS, much thought was given to how to make the tee, and several parents and boys were involved in demonstrations to figure it out.  Dr. Muse remembers going to Western Auto for help and together deciding on a radiator hose to use for the top of the tee.  The hose was flexible and could be pushed up and down on a metal plumber’s pipe to adjust for height.  A clamp was attached around the hose at the top of the pipe to keep it from going down the pipe; and

WHEREAS, the Starkville Daily News describes the new T-Ball league as consisting of six teams (three for eight-year-olds and three for nine-year-olds).  There were 60 T-Ball players the first year.  As reported in the newspaper, “The name ‘T-Ball’ is taken from the manner in which the batters hit the ball.  It is knocked off a tee to fielders rather than being thrown by a pitcher.”  Today, boys start T-Ball at age five, and players get two swings at the ball, which is positioned on a tee made of plastic.  An adjustable tube at the top positions the ball about waist high as with the original tee.  Otherwise, most of the original rules are still followed; and

WHEREAS, each year in the United States, on almost any night during the months of May, June and July, thousands of parents and grandparents gather at community baseball fields to watch their children play T-Ball.  It is almost as much a part of our culture as football and soccer, and many of the baseball players who make it to the major leagues began their careers playing T-Ball.  However, hardly anyone knows that the game of T-Ball, which is now played all over the world, originated and was first played in the State of Mississippi.  Next time you are celebrating (or bemoaning) another afternoon at a ball park, remember your child is playing a game created by and for Mississippians:

NOW, THEREFORE, BE IT RESOLVED BY THE SENATE OF THE STATE OF MISSISSIPPI, THE HOUSE OF REPRESENTATIVES CONCURRING THEREIN, That we do hereby recognize and salute Hinds Community College President Dr. Clyde Muse for inventing the game of T-Ball, a Starkville legacy, and extend to him and the other original volunteers the appreciation of all Mississippi residents and parents all over the world whose young boys and girls are involved with T-Ball programs.

BE IT FURTHER RESOLVED, That this resolution be presented to Dr. Clyde Muse, forwarded to the T-Ball USA Association, and made available to the Capitol Press Corps