RAYMOND – Hinds Community College President Dr. Clyde Muse today announced to the Board of Trustees at their regular monthly meeting his intention to retire on June 30, 2020, after…
By: Cathy Hayden 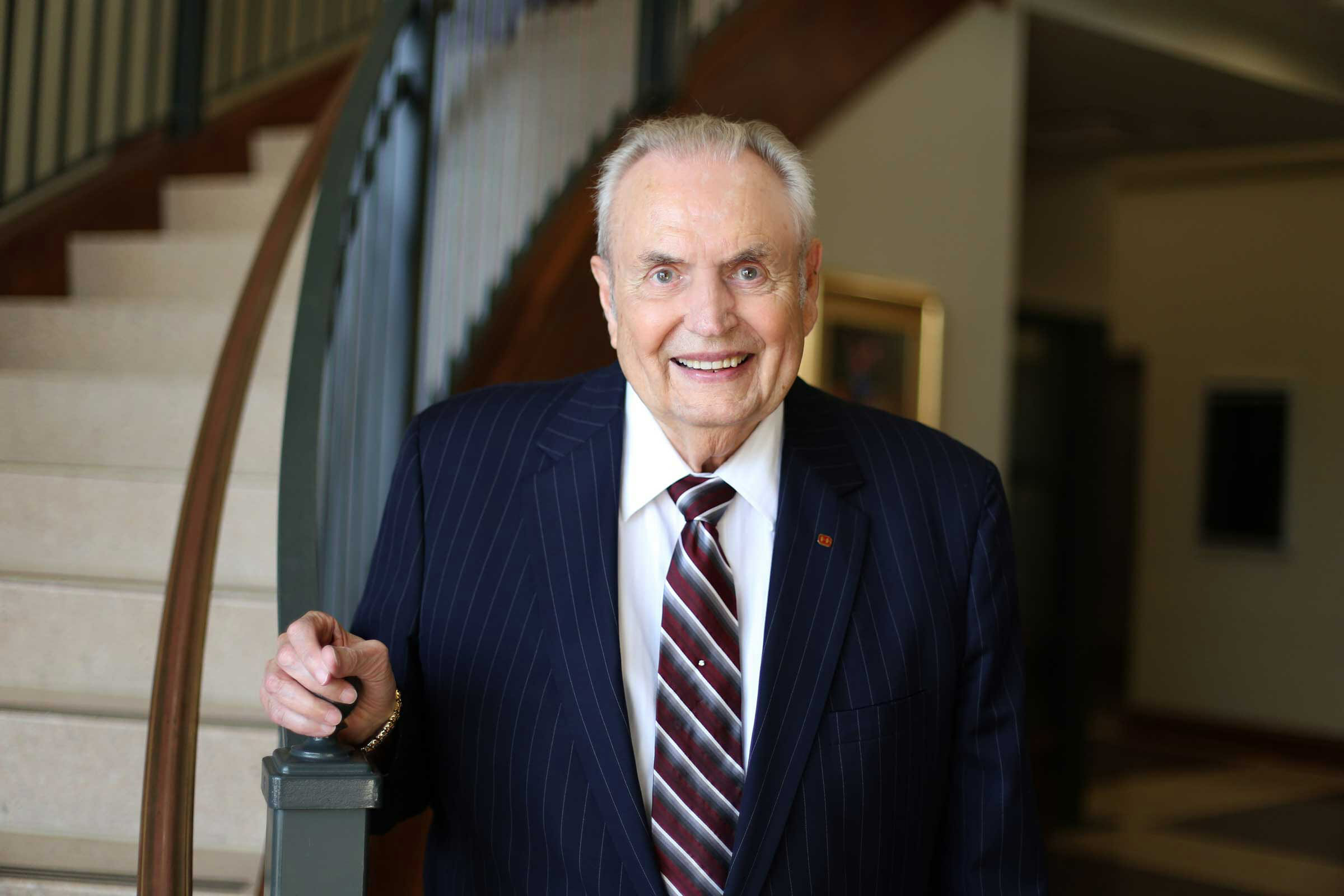 RAYMOND – Hinds Community College President Dr. Clyde Muse today announced to the Board of Trustees at their regular monthly meeting his intention to retire on June 30, 2020, after 42 years as chief of the college and 68 years as an educator.

Muse became president of then-Hinds Junior College on July 1, 1978. He is the longest serving community college president in Mississippi history and among the longest serving college presidents in the nation. He is often called the “godfather” of Mississippi community colleges for his committed vision in moving all the colleges forward and his ability to assemble diverse groups of stakeholders to bring a project to fruition for the benefit of all.

Most of all, however, he is known for his love for and dedication to the students the college serves and its employees. Early in his presidency, he coined the term “The College for All People” while working to ensure all Mississippians have the opportunity for a quality, affordable and accessible higher education.

“Although I was called as a ‘servant’ early in my life, I could never have imagined the path that God would lead me and the blessings I would receive on my journey,” Muse said in a statement to Hinds employees earlier today. “Any success for which I have been credited is because I had the best team standing beside me.

“Over these years, we’ve enjoyed a great deal of success, and it is most certainly due to the dedication and commitment of each one of you. We are often considered as one of the best community colleges,” he said to employees.

“A great deal of appreciation is owed Dr. Muse for his vision and leadership over the past four decades. It is extremely rare for someone to hold a tenure of this magnitude,” said Paul Breazeale, president of the Hinds Community College Board of Trustees. “Through these years, Dr. Muse has led the college through a myriad of economic and social changes. Amidst these changes, he has always demonstrated strength, grace, dignity and 100 percent commitment to put students first. We all know that he is an exceptional man with a servant’s heart.”

A native of Benton County and a preacher’s son, Muse is a graduate of East Central Community College, Delta State University and Mississippi State University. He was a teacher and coach in Canton and Starkville before becoming a principal in Starkville and then school superintendent in Hinds County from 1969 to 1971 and Meridian from 1971 to 1978. He served a total of 26 years in K-12 public education in Mississippi, including leading Hinds County schools through desegregation in 1970.

While serving as superintendent in Hinds County, he also served on the Board of Trustees of Hinds Junior College where he met Ted Kendall III, then board president. When Hinds Junior College President Robert Mayo announced his retirement, Kendall traveled to Meridian to ask Muse to apply for the position.

His accomplishments at the college since then are vast. Over the last 42 years, Muse has improved infrastructure at all six Hinds locations, guiding two branches that began as vocational-technical centers into comprehensive campuses, the Jackson Campus-Academic/Technical Center and the Vicksburg-Warren Campus. Nursing and allied health programs moved from the Raymond Campus to Jackson Campus-Nursing/Allied Health Center in 1982. In 1983, the Pearl/Rankin Vo-Tech Center opened and later became the Rankin Campus.

He expanded the Raymond Campus across Highway 18 to Seven Springs Road where agricultural programs are housed at the Ted Kendall III Agricultural Complex. As the demand increased for business and industry training, Eagle Ridge Conference Center opened in 1996.

Over the years, Muse has been honored in many ways by distinguished groups, including by the Association of Community College Trustees with the Southern Region Chief Executive Officer Award, Gov. Phil Bryant with the inaugural Governor’s Award for Excellence in State Government, the state Legislature, the Boy Scouts and the Mississippi Association of Partners in Education with the prestigious Winter-Reed Partnership Award. He was named alumnus of the year for East Central, Delta State and for the College of Education at Mississippi State University. He was inducted into the Mississippi Coaches Hall of Fame. In March 2020, he will be inducted into the Delta State University Sports Hall of Fame.

He and his late wife of 58 years Vashti Muse have three children, eight grandchildren and 13 great-grandchildren.