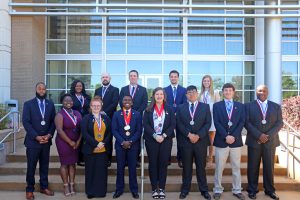 Honored among 15 students overall and named Academic First Team at a ceremony April 10 at the Muse Center on the Rankin Campus were Emily Hudgens, of Madison, a student at the Raymond Campus, and Christopher Golden, of Jackson, a student at the Jackson Campus-Academic/Technical Center.

Hudgens is studying secondary biology education and president of the Gamma Lambda chapter of Phi Theta Kappa honor society. She is an officer in the Mississippi/Louisiana regional PTK organization and is also a 3E Outstanding Student.

Golden is studying culinary arts and works in information technology. In 2017, he was a Dean’s Scholar and President’s Scholar. Each first-teamer was nominated for scholarships under their respective career pathways, Hudgens as a Transfer student and Golden as a Workforce student.

Each of the college’s six locations are represented in the all-academic awards. One student from each of the state’s 15 community colleges is recognized first-team.

Named to the Academic Second Team were:

The All-Mississippi Academic Team, begun in 1994 as the first state-level academic recognition program for community and junior college students, recognizes the scholarly achievements and leadership accomplishments of students enrolled in community and junior colleges across the state. Team members were selected following several rounds of judging from education officials, business leaders from across the United States and a distinguished panel of representatives from federal agencies and national education associations based in Washington D.C.