A current Hinds Community College dean and a retired dean were recently inducted into a prestigious national professional academy at its inaugural event. Dr. Libby Mahaffey of Raymond, dean, Nursing…
By: Cathy Hayden 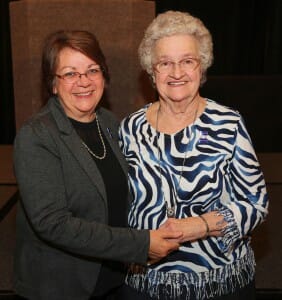 A current Hinds Community College dean and a retired dean were recently inducted into a prestigious national professional academy at its inaugural event.

Anderson began teaching in Hinds Community College’s Associate Degree Nursing program in fall 1969 and in 1973 was named the program director. In 1984, after the program moved to the Chadwick Drive location as Jackson Campus-Nursing/Allied Health Center, Anderson became the first dean. In 1993 the first building at NAHC was named Anderson Hall in her honor upon her retirement. Anderson continued to teach including at the Vicksburg-Warren Campus.

“Associate Degree Nursing Education is a part of the fiber of my life,” Anderson said. “I willingly gave of myself because of my strong belief in associate degree nursing education. My goal in any leadership position was to lead with integrity and to role model leadership for others.”

Dr. Elizabeth “Libby” Mahaffey, became dean, Nursing and Allied Health in 2005. Mahaffey began teaching at Hinds in 1982 and served as a team leader and sophomore coordinator before transitioning to the dean role.  Following in the steps of her mentor, Mahaffey served on the N-OADN Board for six years, including two years as president.  She also served for six years on the National League for Nursing Accrediting Commission Board of Directors, including four years as chairperson.

“I still strongly believe in nursing education at the community college where access, affordability, and graduate success continue to make a difference in the lives of students and in the healthcare of our communities,” she said.