RAYMOND – Utica Campus English instructor Dan Fuller, of Raymond, and Hezekiah Williams, of Edwards, a sophomore studying to be a biomedical engineer, have been named the Hinds Community College honorees for the Legislature’s HEADWAE (Higher Education Appreciation Day – Working for Academic Excellence) program for 2019. 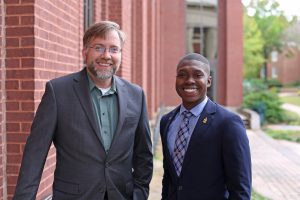 Fuller, employed at Hinds since 2014, holds master’s and bachelor’s degrees in English from Mississippi College and a master’s in theological studies from Brite Divinity School, at Texas Christian University.

“I’m honored to be selected as the HEADWAE instructor for Hinds, though I’ll confess that I thought Dr. Muse had the wrong number when he called to tell me the news,” Fuller said. “The work that I’m doing with my students isn’t any different than what I see from our faculty all across the district, and that commitment to our students is what sets Hinds apart. I love working with my students and seeing firsthand the passion they have to engage in the critical work needed to build a more just world.”

Among Fuller’s numerous contributions to the college include his current chairmanship of the Humanities Division and being a past chair of the English Department, from 2015 to 2018. In 2016-17, Fuller was instrumental in the Utica Campus securing a grant from the National Endowment for the Humanities aimed at Historically Black Colleges and Universities (HBCUs). The effort, “Black Man’s Burden: William Holtzclaw and the Mississippi HBCU Connection,” produced a yearlong lecture and discussion series based on the man who founded the Utica Institute.

Williams, a Mount Salus Christian School graduate, is district president of the college’s Student Government Association and a co-president of Alpha Beta Xi chapter of Phi Theta Kappa, which is the Utica Campus chapter of the national honor society for two-year colleges.

“I am very humbled and grateful to everyone involved in the making of this award and this commemorative program,” Williams said. “This an amazing honor to represent all campuses of Hinds Community College. I give God all of the honor, glory and praise for this accomplishment.”

Williams was named a 2018 HBCU Competitiveness Scholar as part of the White House Initiative on Historically Black Colleges and Universities. He is also a George E. and Doris Barnes Foundation Scholar.

HEADWAE was established in 1988 to honor academically talented students and faculty who have made outstanding contributions in promoting academic excellence. The 32nd annual program is scheduled for Tuesday, Feb. 26, 2019.