[tweetable alt=””]Hinds Community College has been given the 2015 Environmental Hero Award[/tweetable] as the Recycler of the Year for Educational Institutions in Mississippi. The college was recognized by the Mississippi…
By: Danny Barrett Jr.

[tweetable alt=””]Hinds Community College has been given the 2015 Environmental Hero Award[/tweetable] as the Recycler of the Year for Educational Institutions in Mississippi.

The college was recognized by the Mississippi Recycling Coalition for the honor, announced at the state Capitol Tuesday, April 5 during the MRC’s annual recycling awareness event. MRC bestows the award on institutions that promote recycling in their respective communities. 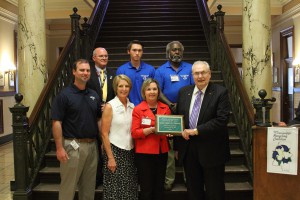 “This award represents the magnitude of the Hinds Community College Recycling Program,” said Jason Pope, director of Hinds’ Office of Sustainability. “We play a prominent role in higher education recycling.”

In December 2015, Hinds surpassed the $10 million mark for energy savings since a concerted effort to cut energy spending across the college’s six locations began in 2008. In 2013, the Office of Sustainability was established and tasked with managing the college’s recycling program.

Since then, initiatives in recycling paper and plastic have expanded to providing receptacles district-wide specifically for plastic bottles, aluminum cans and other recyclables. Proceeds from recycling efforts go to fund scholarships at Hinds. Also, student organizations at Hinds have completed service-hour projects through the office.

MRC is a consortium of business and industry executives, members of trade organizations, nonprofits, state environmental officials and other entities with the mission of informing other economic sectors, public officials and the general public on the importance of recycling. The group promotes recycling through activities such as the Hero award, funding grants to schools to encourage recycling, composting or waste reduction programs and funding scholarships for college students in Mississippi majoring in subjects related to the environment.