PEARL – This year’s service project by Hinds’ Jackson Campus – Nursing/Allied Health Center is a win-win for young cancer patients and survivors and military veterans who need friendly ears to hear their stories.

Proceeds from a softball tournament planned by nursing instructors and students raised about $4,000, split evenly between Camp Rainbow, a five-day camp dedicated to pediatric cancer patients and survivors ages 6 to 17 in Mississippi, and the Warrior Bonfire Project, a Vicksburg-based nonprofit for Purple Heart veterans. Rain halted the games, but not the giving.

Funds raised for WBP will pay for an all-inclusive, three-day archery hunt later this year at Tara Wildlife, north of Vicksburg, for Tim Bell, a Blue Springs veteran chosen by the organization to take part in its next event for its next activity, and his spouse, said Lesa Wilson, director of the Diagnostic Medical Sonography program at NAHC. The donations were announced Saturday at Hinds’ Military Appreciation Day at the Muse Center on the Rankin Campus. 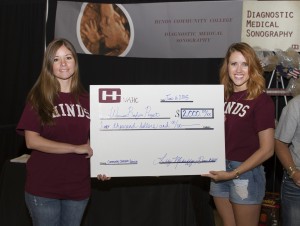 From left, Angela Dewey and Melody Rayborn Block, both students in the Diagnostic Medical Sonography program, hold a check for $2,000 to the Warrior Bonfire Project from the Nursing/Allied Health Center as part of this year’s community outreach service project.

Also donated for Bell’s hunt were a “Bad-Boy Buggy” from Nelson Golf Cars & Utility Vehicles, in Jackson, a “Mr. Buddy” portable propane heater and a $300 gift card from Bass Pro Shop, purchased by the nursing students.

“We’re very excited to do this for him,” Wilson said. “The DMS students raised money for the gift card by creating and selling t-shirts.”

“On behalf of the Warrior Bonfire Project, its founder, Dan Fordice, and board of directors, we would like to thank you and all of the 2015 Class of Diagnostic Medical Sonography at Hinds Community College for your outstanding efforts to secure an opportunity for one of our Purple Hearts from Tupelo to go on an archery hunt weekend at Tara Wildlife and for his spouse to come along,” said Helen Phillips, director of special projects for WBP. “We thank you for your continued support of our organization, at Hinds Community College and the surrounding areas.

Bell, a first sergeant in the Army’s 155th Armored Brigade Combat Team, was injured in Iraq when his platoon was attacked twice in four months in 2009.

“I love to deer hunt and I am so excited for this opportunity,” Bell said in a letter to Wilson and her students. “Thank you so much for what you folks have done. I wouldn’t ever be able to go to a place like this if it wasn’t for people like y’all.”

WBP was founded in 2012 and involves veterans injured in combat a chance to bond through activities in stress-free environments that promote camaraderie and therapeutic healing.

Each year, the Nursing/Allied Health Center has a community outreach service project to benefit area charities. For more information on future projects or the Diagnostic Medical Sonography program, email lbwilson@hindscc.edu.