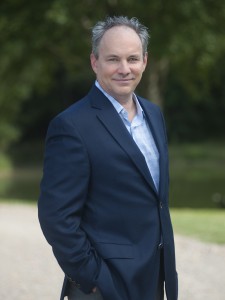 Neilsen believes in second chances. His second chance came at the College of Idaho where history professor Howard Berger saw potential, while others saw a brash kid from a middle-upper class family who was passed from grade to grade, more trouble than untapped potential.

The relationship got off to a rocky start when Berger challenged Neilsen’s ability to read. He recalls the “horrible” experience of being asked to read aloud and struggling to string the words together. After taking a written entrance exam, Berger told Neilsen, “Ray, your writing skills stink.”

“I didn’t know how bad I was until I met someone who cared about me and my success,” Neilsen says. “He opened my eyes to the value of education and learning.”

It was just the second chance he needed. With Berger’s help — and a lot of hard work and dedication — Neilsen committed himself to his education, earning bachelor’s and master’s degrees. Over a 20-year period, Neilsen earned his way up the ladder, from busser to chairman of Ameristar Casinos with eight locations in six states and more than 7,000 employees.

Neilsen began his relationship with Hinds in 2006 when his passion for learning surfaced in an onsite GED preparation program at Ameristar Casino in Vicksburg. As general manager he recognized that many Ameristar team members missed opportunities to grow with the company because they lacked a high school diploma. Their second chance came with a boss who gave them a pathway to personal fulfillment and $1,000 when they passed the GED test.

His father, Craig H. Neilsen, was the founder of Ameristar Casino. “He was proud of the GED program we established at Ameristar Vicksburg,” Ray Neilsen says. Wanting to make a bigger impact in his adopted community of Vicksburg, Neilsen called upon the resources of the Craig H. Neilsen Foundation, which was established by his father in 2002 to support spinal cord injury (SCI) research and rehabilitation. Ten percent of the foundation’s resources go to other entities helping to improve lives.

Craig Neilsen, who became quadriplegic after a 1985 car accident, rarely spoke about his injury, but once said, “…I think that most people – when push comes to shove – take their hard knocks and then pick up the pieces and go on.”

From that initial investment, the foundation has awarded more than $600,000 to support the ABE/GED program at the Vicksburg-Warren Campus and the Jackson Campus-Academic/Technical Center. From a computer lab staffed by tutors to instructional dollars to provide more class time for adult learners, the Neilsen Foundation has been the college’s partner in improving outcomes in Adult Education. This year Neilsen Foundation funds support a Single Stop office at the Vicksburg-Warren Campus and a basic computer applications course designed specifically for adult learners who must now take a computer-based GED test.

Most recently, the Neilsen Foundation is funding scholarships and supplemental support for two Hinds students with spinal cord injuries. After his father’s death in 2006, Ray Neilsen was named cotrustee and chairman of the Craig H. Neilsen Foundation.

“After several years of therapy, my dad only had limited use of a few of his fingers, nothing else,” Neilsen explains. “The accident only slowed him down for a little while, and over time, his focus and attention became more laser-like and intense.”

Those same words might be used to describe Ray Neilsen, says Colleen Hartfield, vice president for Community Relations and Governmental Affairs at Hinds. “When Ray makes a decision to be personally involved in a project or a cause, he’s all-in. He expects that same commitment from others.”

She credits the Neilsen Foundation for being a catalyst for positive changes in the Adult Education program. “Ray doesn’t just write a check; he brings resources and connections gained over a successful career to the college. Most of all, he brings a genuine concern, coupled with an incredible drive to make a difference,” Hartfield says, adding with a laugh. “It can be exhausting trying to keep up with his mind.”

Neilsen says, “There’s this crazed energy, under the surface. It’s doesn’t make my life easy, but I can’t imagine doing it any other way.”

Today, Neilsen and his wife Nancy, a Vicksburg native, live in Edwards on a meticulously landscaped ranch, where visitors will find a rock garden. Etched into the rocks are words that describe his personal brand, and nestled among words such as “integrity,” “courage” and “family,” are rocks inscribed with “Hinds Community College” and “GED.”

“It’s a place of honor,” Hartfield says. “I am so pleased that the college is responding, in kind, and recognizing Ray with the very well-deserved Alumni Service Award.”

Neilsen says he is honored and pleased to accept on behalf of the Craig H. Neilsen Foundation and the Adult Education students at Hinds Community College.

“I believe the American dream is still alive,” he says. “However, I tell students in the program that to succeed, an education is paramount. I tell them that education gives you hope that your life can be better. I teach them what my Dad taught me—success must be earned, and you must do what you do better than anybody else. That’s the difference the Craig H. Neilsen Foundation and Hinds CC are making in the lives of Adult Education students and in our community. It is my intention that our partnership will continue for many years to come.”