RAYMOND – Hinds Community College celebrates Homecoming Oct. 17 and 18 with alumni activities both days. On Wednesday, Oct. 17, Hinds alumni from the college class of 1968 and high…
By: Cathy Hayden

On Wednesday, Oct. 17, Hinds alumni from the college class of 1968 and high school and college classes from prior years will be have a get-together at 10 a.m. at Fountain Hall.

A career in service first honed at Hinds has resulted in quite the year for Dr. George Hopper (1973), dean of the College of Agriculture and Life Sciences at Mississippi State University. 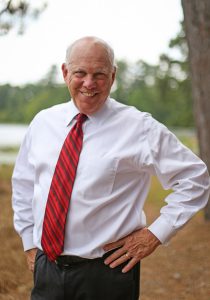 In fall 2017, Hopper won the Excellence in Leadership award from the Southern Association of Agricultural Experiment Stations Directors at the Association of Public Land-Grant Universities.

This year, he is being honored as Hinds Community College’s Alumnus of the Year. “I’m honored and humbled by the recognition,” he said. “I’d like to think it’s not about me, but about all the alumni who have gone through Hinds and done well. The reason why Hinds has had so many people who have done well is that they’ve been an educational institution that does a good job educating people.”

Hopper, a Vicksburg native, took science-related prerequisites in 1972- 73 at Hinds and attended MSU, where he earned a bachelor’s in chemistry. His Ph.D. in plant psychology is from Virginia Tech University. He worked for a time at the University of Tennessee, then went into administration in forestry/wildlife.

Much of Hopper’s daily interactions with students involve visits to the university’s plant or forestry research centers on or near campus or any of 16 experiment stations statewide. One such station is housed on Hinds’ Raymond Campus, as part of the T.H. Kendall III Agriculture Complex.

“I am pleased we’re able to partner with them in terms of their site and parking facilities we have there,” Hinds President Dr. Clyde Muse said. “We have great partnership existing with Mississippi State and agriculture in so many different ways.”

Listening to student concerns is also a big part of Hopper’s job, first and foremost, he said. “If they’re coming to the dean’s office, they’re coming to get something done,” he said. “The most important thing for us as administrators is whatever the first thing they say.”

It’s a skill he first learned from his experience at Hinds nearly 50 years ago, and it still resonates today as a senior administrator at the state’s premier research university. “Hinds is still important to me and particularly to people in their district,” he said.

The Dallas family’s connections to Hinds Community College are long and deep, starting when Harvey Dallas (1974) was a student at what is now Jackson Campus-Academic/Technical Center. 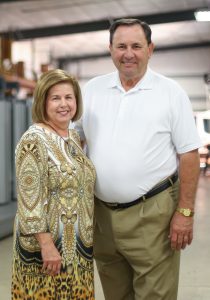 He graduated from Hinds after studying fire safety technology. After eight years as a Jackson firefighter, and a few trips to the hospital in the line of duty, he and wife Brenda decided he needed a safer profession. Even where he worked shifts at a Jackson fire station, Dallas worked with his uncle in the printing business part time for many years.

Harvey and Brenda Dallas, who now live in Brandon, started Dallas Printing in 1991. A few years later, their relationship with Hinds developed as they did more and more business with the college. Now, Harvey Dallas serves on the Hinds Community College Foundation board.

“What he’s done for this college over the years is truly outstanding. He has helped us in so many ways,” said Hinds President Dr. Clyde Muse. “I was pleased that the committee chose him as our Alumni Service Award winner. He and his company are very deserving.”

Dallas Printing, located in Richland, has grown from two employees, Harvey and Brenda, who handles the accounting books and the front office organization, to 30 employees. Like their dad, the two oldest sons, Joseph Harvey Dallas Jr. and Bryan attended Hinds, Joe graduating in 1991 and Bryan in 1994.

Over the years, all three Dallas sons, including youngest son David, have worked in the family business. Both Bryan and now David are “totally committed to this operation and can run anything back there. No other printer in town can say that. These boys can do it,” Harvey Dallas said.

Hinds Graphic Specialist Tre’ Thornhill remembers well when Joe Dallas first came by his office. “He was very friendly, had some nice quality samples of their work and wanted to give me some prices for our regular print requests. The prices were great, so we decided to try them out,” he said.

Dallas Printing has handled many Hinds projects but none more important than the materials for the year-long 2017 Centennial celebration.

“They printed all the Centennial pieces, even working overnight to get the 100 People Passionate about Hinds book done after we made last minute changes. Their attention to detail, their belief in customer service and their genuine desire to provide outstanding service is rare in our day,” said Jackie Granberry, executive director of the Hinds Community College Foundation. 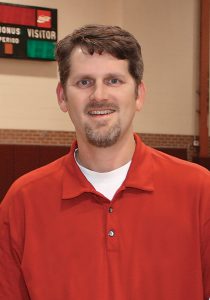 Anders played baseball for Hinds Community College from 1988 to 1989. A native of Monroe, La., Anders was a sidearm pitcher for the Eagles baseball program.

In 1989, Anders was a crucial component of the Hinds pitching staff that helped lead the team to divisional, state, regional and district championships along with a berth to the Junior College World Series in Grand Junction, Colo. This was the first time in the history of junior college baseball that a team from Mississippi played in the College World Series in Grand Junction.

During the 1989 season, Anders pitched in 35 of the team’s 54 games. He had a record of 11 wins and two losses with a record-setting nine saves. Anders’ record wasn’t broken until 2015. Anders finished with an earned run average of 1.75, and his pitching was crucial on the team’s road to the World Series.

He pitched in all five games of the Eastern District Tournament held in Greenville, S.C. There, he won two games and recorded saves in two games, including recording the last out to send his team to the World Series.

After leaving Hinds, Anders played baseball at Delta State University and then received his master’s degree from Northeast Louisiana University.

He currently works as a manager in cardiology at a hospital in Ft. Smith, Ark. Anders resides in Alma, Ark., with his wife, Christy and three children, Taylor, Tucker and Sydney. 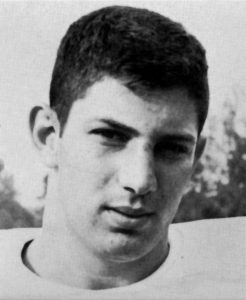 Daher, an Atlanta native, was a two-way standout for the Eagles football program during his two seasons at Hinds, from 1959 to 1960.

Already a versatile athlete – he won the Georgia state boxing champion in high school – Daher made that versatility his hallmark at Hinds. As a running back, he earned first-team All-State and All-American honors after setting the school record in 1960 for rushing yards in a single season, with 985 yards, a mark previously held by future NFL Hall of Famer Jimmy Taylor. The rest of his stat sheet for 1960 showed 167 carries, nine touchdowns and 5.6 yards a carry.

As a linebacker, he was named a second-team All-American after an impressive season with 10 tackles a game, four fumble recoveries and three interceptions. He contributed on special teams, averaging 18 yards returning kickoffs.

After Hinds, he was offered a scholarship from the University of Kentucky to play both sides of the ball, but decided to return home upon the death of his father and run his father’s sales business. He spent most of his post-Hinds professional career as a food and beverage broker, but also played football professionally with several semipro teams, including the Atlanta Spartans and Orlando Panthers. In 1964, he was the Spartans’ leading rusher.

He was also an active volunteer for Special Olympics, promoting the program and recruiting people to participate. The organization awarded him with the Super Sport award for his contributions.

He died in 1996. He is survived by sons Mike Daher and Mark Daher, four grandchildren and five great-grandchildren

Lofton, a Jackson native, was a two-time All-State selection for the Lady Eagles slow pitch softball team in 1985 and 1986. Also during that time, Lofton helped lead her team to back-to-back state championships.

She was named the team’s best offensive player as she led the team with the highest batting average both years. In 1986, Lofton was awarded the prestigious Eagle Award, the highest athletic award given to an athlete, for her accomplishments on the field, in the classroom and her service in the community.

After graduation from Hinds, Lofton continued her education at the University of Southern Mississippi. While there, she was an active member of the Fellowship of Christian Athletes and participated in intramurals.

Lofton returned to Hinds for an Associate Degree in Nursing, graduating in 1996. She began her nursing career at Central Mississippi Medical Center. From 1997 to 2010, she was a pediatric nurse and became the charge nurse. She also served as mentor for nursing students and was a preceptor for new hires.

Lofton lives in Byram and is married to C.J. Adams. She has three children, including daughter Kaylon Lofton Moore, 27; Christopher Adams, 20; and Colton Adams, 10. 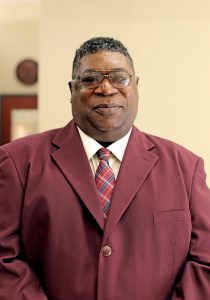 McQuitter, who coached at Hinds from 1980 to 1990, made his mark bringing success to two baseball programs that eventually found success as one.

His Utica teams went 284-145 and sent 70 players to play at four-year universities. Another 24 played Major League Baseball, with three of those drafted in the first round. Twice, in 1984 and 1988, he coached teams at the Junior College All-Star Games.

In 1989, baseball consolidated at the Raymond Campus as part of the merger between Utica and Hinds earlier in the decade. He became associate head coach alongside Rick Clarke. In their first season, the Eagles won state, Region XXIII and Eastern District championships and made their first appearance in the Junior College World Series.

The 1989 team remains the only team to have won a state, regional and district championship and play in the Junior College World Series in the same season.

McQuitter attended Jackson State University, where he earned a bachelor’s degree in mass communications. He earned a master’s in Educational Technology in 1980 upon the start of his coaching career in Utica. 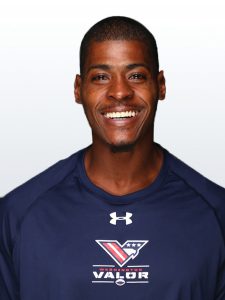 Toliver, a Mainland, Fla., native, played football and basketball at Hinds in 1996 and 1997, setting several records as the gridiron Eagles’ quarterback.

The Eagles had a perfect 11-0 record in 1996 with Toliver under center, the first such undefeated season for Hinds since 1957. In 1997, the team went 10-2 and won state and region championships for a fourth consecutive time. Toliver finished his time in the program with the school record for total offense, with 4,350 yards, and the single-season total offense record, with 2,720 in 1997. Among his most prolific outings was a 237-yard rushing performance against Jones County Junior College. He was also selected National Junior College Athletic Association All-American in 1997.

Toliver played basketball at Bethune-Cookman University, then moved back into football professionally over the next four years with the NFL’s St. Louis Rams and Tampa Bay Buccaneers and the Arena Football League’s (AFL) Tampa Bay Storm. His stint with the Buccaneers came during the team’s run to winning Super Bowl XXXVII, in January 2003. The Storm won the league’s championship game in June 2003, making Toliver the first player to be on winning Arena Bowl and Super Bowl teams in the same year.

Toliver, now 41 and the oldest player in the AFL, has since built an impressive career in the league, as a wide receiver and defensive back for four teams. As a member of the Storm in 2004, he was named to the All-Ironman team for offensive and defensive excellence.

In 2010, with the Orlando Predators, he set a record for receiving touchdowns in a single playoff game, with seven. He holds the AFL records for receiving yards, all-purpose yards and is the first player to amass at least 5,000 yards receiving and 400 receptions with two different teams.

In 2017, he joined the Washington Valor and, this past July, played for his second league champion as the Valor won Arena Bowl XXXI over the Baltimore Brigade.