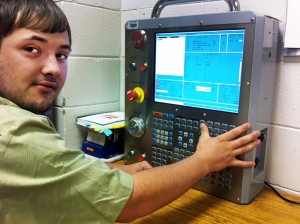 A Hinds Community College student in a high school career-technical program in Vicksburg is getting ready for the big leagues, but he has some more work to do first.

That award won for him a trip to the national competition in Louisville, Ky., in June and a chance to win a full college scholarship.

“He has an online tutorial that tells him what skills he will have to use and what he will have to be able to do when he gets to Kentucky,” said Thomas Maples, Britt’s Hinds instructor for three years who will travel with him to the national competition. “Then he’ll have to practice and prepare. He won’t have but about a month.”

Britt and Maples explained that the time crunch will be nothing new for the student.

“Skills USA in January canceled the competition in ‘precision machining’ and said students would begin to compete in ‘Computerized Numerical Control Turning and CNC Milling,’ ” said Maples, who is retiring this year.

That presented a problem for the Hinds competitors – the Vicksburg-Warren Campus did not own the simulator used for the CNC training. Maples said he took his problem to his dean, Marvin Moak, who immediately secured the needed Haas CNC simulator. That left Britt under the gun to learn it quickly so he could compete in March in the state CNC Turning Competition.

Britt, a lifelong resident of Vicksburg, said he has had an interest in working with metal since beginning the high school program three years ago. He thinks the interest might come naturally because his father, who lives in Florida, maintains machines for the pharmaceutical company where he works.

After high school, he plans to enter the two-year machine shop program at Hinds Community College’s Raymond Campus and then be ready to secure a job in a machine shop. His dream job, he said, would be in aeronautics.

While at Hinds, Maples said, Britt has excelled in the machine shop program. In addition to taking his academic classes at Warren Central in the mornings and his career technical classes at Hinds in the afternoons, Britt also is a part-time deliveryman for Fastenal Tools, which has allowed him a close look at machine shops across Vicksburg, including those at Cameron Technologies, Eaton Manufacturing, Batesville Casket Company, International Paper and the U.S. Army Corps of Engineers’ Research and Development Center.

Britt’s role as an assistant teacher was made possible through his selection for the Career Pathways Experience, which allows him to assist Maples and fellow students.

The Skills USA National Competition will be June 22-26. First-, second- and third-place winners in the national competition are eligible for college scholarships from the Gene Haas Foundation of Oxnard, Calif., which honors winning students through the National Institute of Metalworking Skills.

Vicksburg MI-BEST student shows the way to success with GED