Note: The following story appears in the winter issue of Hindsight alumni magazine. For more information about the Hinds Alumni Association, see the website. To apply for a Hinds Community College Foundation…
By: Danny Barrett Jr. 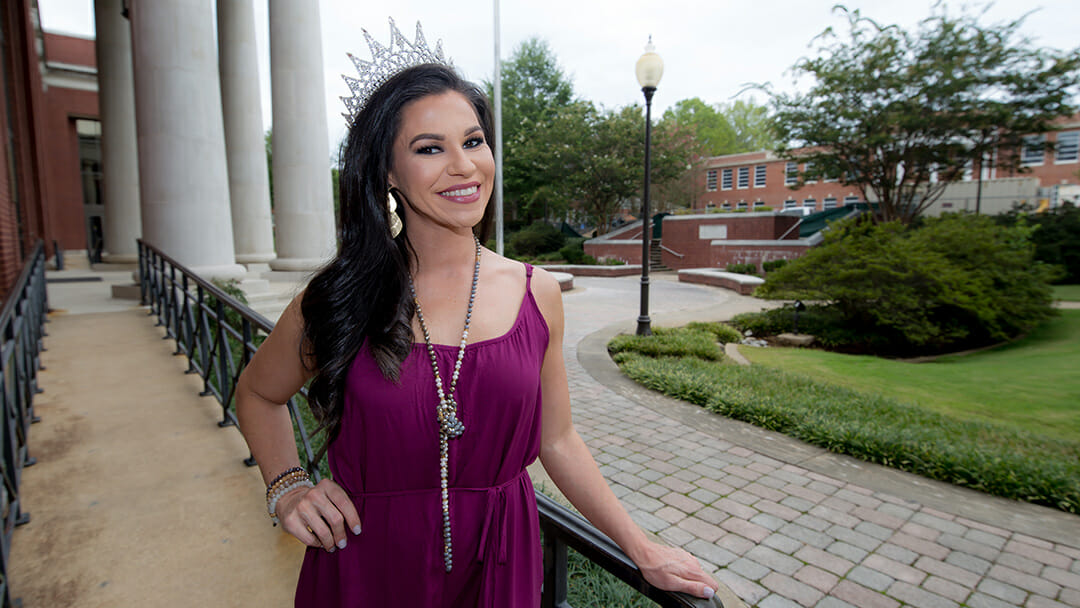 Note: The following story appears in the winter issue of Hindsight alumni magazine. For more information about the Hinds Alumni Association, see the website. To apply for a Hinds Community College Foundation scholarship, go to the Admissions tab on college web site at www.hindscc.edu or click here.

RAYMOND – Getting back into shape after her daughters were born meant dusting off the old tiara for Marisa Lepard Farr.

“I wanted to set a goal for myself to get back in shape, so I decided to go for it this past January,” Farr said of her decision to compete in the 2017 Mrs. Mississippi United States pageant in Tunica in June, as Mrs. Rankin County. 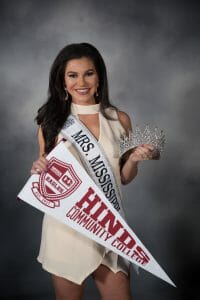 It was quite the splashy return to the stage for Farr, a Terry native who won this past year’s state title and took it to Orlando, where she competed for Mrs. United States a month later. Though the run ended there, the former Montage Theatre of Dance member at Hinds Community College looks forward to big things during her yearlong reign as the state’s top married beauty queen.

Her platform as this year’s title-holder stems from an experience she had while about a year ago driving along Highway 18 in Brandon. She came upon a terrible wreck scene that resulted in the deaths of two children, aged just three and five years old.

“They were not in proper car seats at all,” she said. “I have always believed in car seat safety for my own children, so seeing the wreck and the negative impact of not using proper car seats took it to a different level for me.”

It’ll be a chance to do what she’s done a fair amount of since her college days – teaching.

She was part of the first Montage Theatre of Dance troupe, started by current program director Tiffany Jefferson. After Hinds, she moved on to the University of Southern Mississippi, where she majored in Elementary Education. She taught middle school briefly and still teaches dance, at Northwest Rankin Middle School. Currently, she is a sales agent for Younique, a cosmetics maker. She and husband, Coleman, have two daughters, Sarah and Ava.

She had done Miss Teen Mississippi USA and competed in the Eagle Beauty Revue as a Hinds student. “After I got married, a friend suggested I do Mrs. Mississippi,” she said. “I didn’t know they had pageants for married women.”  She won first runner-up in a few of them before having her two daughters.

Jefferson choreographed a solo routine in one of those pageants.

“Marissa had a strong interest in dance and pageantry even while she was here at Hinds,” Jefferson said. “A course she studied with me was Jazz/Hip Hop, and during that time we studied the Bob Fosse style. She gravitated toward it with fondness and decided to do ‘All That Jazz’ for her talent.”

Her dancing feet led her to what is now the state’s community college system’s only full dance program.

“We had no dance class in high school, so when I came to Hinds I randomly signed up for a jazz dance class,” she said. “It happened to be Tiffany Jefferson’s very first dance class that eventually became Montage.”

“We did a few competitions that first year, and traveled to San Antonio and danced. She’s really taken off since then and helped get opportunities for her dancers.”

Hinds has a special place in her heart, as she and Coleman met while members of the Baptist Student Union and their career paths fell into place after some initial stress.

“It was a blessing to me at that time in life,” she said. “After high school, I had planned to go into fashion merchandising at another university in the state. But the program wasn’t there anymore once I went to apply. I didn’t know what I was going to do. Thankfully, I got a full scholarship to Hinds, which was helpful to my parents at the time. Hinds was like my little sanctuary, where everything fell into place with what I wanted to do with my life, which was to teach.

“My husband and I talk about it all the time, about how if just one thing been different, we’d have never known each other or had our beautiful children. We have Hinds and the BSU to thank for that.”