Coach Gene Murphy, who has led the Hinds Community College Eagles in football for 33 years, is stepping down as head coach but will continue as athletic director. “As athletic…
By: Cathy Hayden

Coach Gene Murphy, who has led the Hinds Community College Eagles in football for 33 years, is stepping down as head coach but will continue as athletic director.

“As athletic director, Coach Murphy will continue to provide leadership and support to the athletes, coaches and staff of the athletic department,” said Hinds President Dr. Clyde Muse.

Effective immediately, Larry Williams will assume the position of head football coach. Williams has served as the defensive coordinator for the last four seasons. He also served in this capacity previously from 2003-2009.

“Williams’ experience in the Mississippi Association of Community and Junior Colleges is impressive, and he will provide steady leadership for our football team and the coaching staff,” Muse said.

Murphy completed his eighth season in his second stint as head football coach last year. He was also head coach from 1987 to 2003. He has served as athletic director since July 1997. 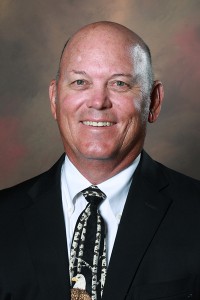 “It has been a privilege to serve as the head football coach at Hinds Community College. It has also been a privilege to work along some very special assistant coaches,” Murphy said. “It is my hope that my coaching legacy will be, in short, an impact on thousands of young men in learning how to become successful on the football field, but more importantly in the game of life.”

Up to this point, Murphy has been the winningest active coach in the National Junior College Athletic Association.

Under his tenure, a Mississippi Association of Community and Junior College and National Junior College Athletic Association Region XXIII title in 1988 was followed up a few years later by a four-peat between 1994 and 1997 for both trophies. A sixth state and regional title under Murphy and the program’s 13th overall came in 2000.

Murphy’s teams have gone 172-76-5 in his two tenures as coach, from 1987-03 and 2009-present, guiding teams to the state playoffs 14 times and eight junior college bowl games. During that stretch, numerous former Eagles have gone on to notable careers at four-year universities and more than 50 have played in the National Football League.

Marks of success both on the football field and off are evident in the 15 times the college has won the David Halbrook Award since 1987. The award is given to the community or junior college with the highest percentage of graduates or completers in its athletic programs district-wide.

Williams offered kudos to Murphy as a mentor who has helped him over the years get to this point.

“I’m extremely excited and blessed to be the new head football coach of Hinds Community College.  Being a head coach is something I’ve always dreamed of, and I’m ready to lead this talented group of young men and get this season going,” he said.

“I want to thank Dr. Muse and Gene Murphy for giving me this opportunity. I’ve worked with Gene for a long time now and I’ve learned so much from that man. He changed the culture and set the high standards not only for Hinds Community College but Mississippi Junior college football in general,” he said.

Williams said he plans to follow in Murphy’s footsteps.

“My main goal is to continue to build upon the great tradition of this football program and to make Hinds a household name in the state of Mississippi,” he said.

Williams had immediate impact on the Hinds defense in his first season back in Raymond and the defensive unit finished 14th in the National Junior College Athletic Association (NJCAA) standings in total defense.

Williams also served as the defensive coordinator at Co-Lin, helping lead the Wolfpack to the 2012 MACJC state championship, and spent the 2010 season as the defensive line coach at East Mississippi Community College.

A former standout at Mississippi Delta Community College and Mississippi State University, Williams returned to MDCC to begin his coaching career for a six-year stint, serving as the Trojans’ defensive coordinator and defensive line coach from 1997 until 2002. He helped guide Delta to a pair of state runner-up finishes (1997 and 2001).