PEARL — Cynthia Jones decision on what to study in college took a while, but her look on graduation day was all about speed. “Everything in my house is decorated…
By: Danny Barrett Jr.

PEARL — Cynthia Jones decision on what to study in college took a while, but her look on graduation day was all about speed.

“Everything in my house is decorated cheetah,” Jones said, with her favorite animal print adorning her shoes and top of her mortarboard. A silver C shined bright in the middle of black and gold wildcat spots. 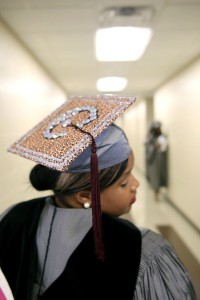 Hinds Community College Jackson Campus- Academic/Technical Center student Cynthia Jones graduated with an Associate of Arts in General Studies and plans to study healthcare administration at a four-year institution. She decorated her hat in her favorite pattern, cheetah spots, and her first initial. At left, Jones shows off her cheetah-print shoes. (Hinds Community College/April Garon)

Jones graduated from Hinds Community College on Friday, July 29 with an Associate in Arts degree in General Studies, a credential she hopes will be a first step to an advanced degree in healthcare administration.

“My mom is a registered nurse at UMMC in Jackson,” she said. “What I want to do is open a daycare with a medical staff to help out parents who often have to spend time and money taking care of their kids when they are sick. It will be daycare with a little bit of healthcare.” 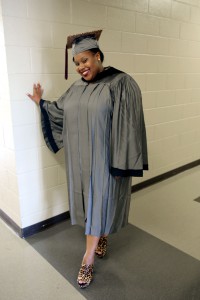 Hinds Community College conferred 467 degrees and certificates to 405 graduates in two [tweetable alt=””]graduation ceremonies at the Muse Center on the Rankin Campus[/tweetable]. “A good number of our graduates are earning more than one community college credential,” said Hinds President Dr. Clyde Muse.

Of that number, 256 students have chosen to participate in one of the two summer ceremonies.

Among those were friends Jawanza Tillman and Amber Taylor, who met while attending the Utica Campus. 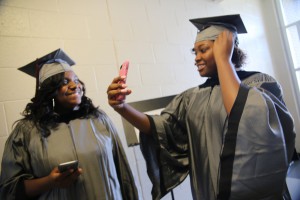 Jawanza Tillman, left, looks on as her friend, Amber Taylor checks her hat using her smartphone camera just before summer graduation at the Muse Center on the Rankin Campus of Hinds Community College. Tillman earned an Associate of Applied Science degree in Early Childhood Development, while Taylor’s Associate of Arts is in Accounting. (April Garon/Hinds Community College)

“This day is special because it’s us, it’s two friends graduating,” Tillman said. Her Associate of Applied Science degree is in Early Childhood Development, while Taylor’s Associate of Arts is in Accounting.

As much as Lemond Williams credits his instructors for making his graduation from Hinds Community College possible, it was inspiration at home that cheered him loudest.

“It was actually my wife who inspired me to come to college,” said Williams, a machine operator at Batesville Casket in Vicksburg who earned career and technical certificates on Friday during summer graduation ceremonies. 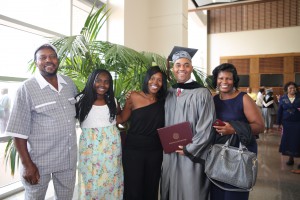 Lemond Williams, second from right, was among more than 400 graduates to whom degrees and certificates were conferred on Friday, July 29, 2016 during summer graduation ceremonies held at the Muse Center on Hinds Community College’s Rankin Campus. From left, John Singleton, Williams’ father-in-law, Genean Edmond, his daughter, Tanna Williams, his wife, Williams, and Marcelina Singleton, his mother-in-law. (April Garon/Hinds Community College)

The lifelong journeyman balanced work and school with grueling, 17-hour days – working his dawn-to-dusk shift at the plant, then attending classes at the college’s Vicksburg-Warren Campus. It wasn’t easy, his wife, Tanna, agreed, but he made it happen.

“He hadn’t ever been to college, so it was just amazing,” she said. “I’m so proud of him.”

The speaker for both graduation ceremonies was Dr. Ed Davis, director of the doctoral program for Rural Community College leaders at Mississippi State University.

“Many of you graduating today have chosen a path to go into the world of work immediately. Your terminal degree will provide you access to jobs providing for your family and love ones.  You are to be commended for having the desire to become proficient in an area that is needed and seek out employment,” Davis said. “Some you are only beginning the pursuit of a degree. You now will go on to other institutions and seek to reach a level of a certain type with your next steps.

“I challenge you all to be, whatever your professional choice, invested in the communities, towns, homes and regions where you will live.  Become involved, not just in your life, and those of your loved ones and friends.  Find ways to reach out and serve.  I promise you will live a more fulfilled life if you strive to do as much good to all around you every day,” Davis said.

“I suspect if we polled each graduate, nearly all would say they went to college to make things better — for themselves and for their families,” Muse said. “The power of education is that it drives our vision for a better life.  And, while the graduates here today represent a diverse set of circumstances, they are connected by their belief that a community college education is a step up to a broader opportunity to build a better life.”