Hinds Community College has named the football field at Joe Renfroe Stadium in honor of Gene Murphy, who stepped aside as head football coach in August because of health problems.…
By: Cathy Hayden

Hinds Community College has named the football field at Joe Renfroe Stadium in honor of Gene Murphy, who stepped aside as head football coach in August because of health problems.

Murphy was surprised with the announcement during a halftime ceremony Thursday night (Sept. 14) during the home game against Southwest Mississippi Community College. The naming of the field as Gene Murphy Field was approved by the Hinds Community College Board of Trustees earlier this month. 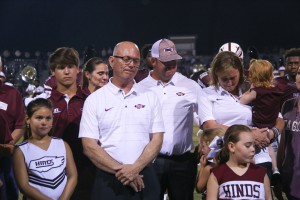 Surrounded by the coaching staff, football players and his family including wife Dot, the specialists coach who has coached alongside him many years, Murphy was presented with a photograph of the field with the heading “Gene Murphy Field” at the top by Hinds President Dr. Clyde Muse, Hinds Athletic Alumni Chapter President Rick Trusty and Jim Southward, director of Athletic Activities for the Mississippi Community College Board.

“I’m really honored. I just don’t know how to express it. It’s hard to describe it,” Murphy said through tears. “But I thank so many people who have been supportive. The players, obviously, for many, many years. Dr. Muse and all the administration. My coaching staff – I’ve had a lot of great coaches with me over the years that paved the way.”

Murphy, who remains athletic director, served as head coach twice for a total of 24 years. As of the time he stepped down from active coaching, he was the winningest active football coach in the National Junior College Athletic Association and is also the winningest football coach of all time at Hinds Community College.

Murphy said it has been difficult to watch from the sidelines. “I’ve been trying to make this transition ever since I’ve been feeling better,” said Murphy, who has been battling an inner ear problem. “I’ve just wanted to be around the kids and the coaches. I’m just glad to be a part of this season.”

He has been involved in Hinds football since 1983 when he was assistant football coach under Bill Buckner. He was head coach from 1987 to 2003 and then again from 2009 to 2017.  Murphy’s teams have gone 172-76-5 in his two tenures as coach, guiding teams to the state playoffs 14 times and eight junior college bowl games. During that stretch, numerous former Eagles have gone on to notable careers at four-year universities and more than 100 have played in the National Football League. 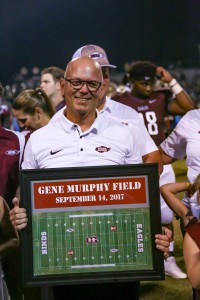 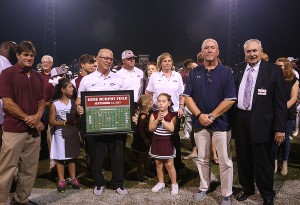 The Hinds Community College football field was named Gene Murphy Field in honor of the coach who stepped aside as head coach last month. At the Sept. 14 halftime ceremony were, from left, Rick Trusty, president of Hinds Athletic Alumni Association chapter; Murphy holding the photograph; his wife Dot Murphy; Jim Southward, director of Athletic Activities for the Mississippi Community College Board and Hinds President Dr. Clyde Muse. The announcement was made as Murphy was surrounded by his children and grandchildren, also pictured. (April Garon/Hinds Community College) 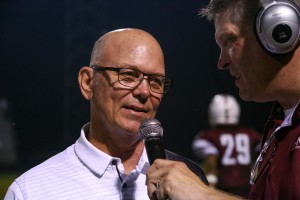 A tearful Gene Murphy is interviewed after the presentation. (April Garon/Hinds Community College)

Marks of success both on the football field and off are evident in the 15 times the college has won the David Halbrook Award since 1987. The award is given to the community or junior college with the highest percentage of graduates or completers in its athletic programs district-wide.

Larry Williams, who is also defensive coordinator, assumed the role of head coach in August.