Hinds Community College alumnae Gwen Post White of Brandon is among Mississippi community and junior college athletes who were inducted into the Mississippi Association of Community and Junior Colleges Sports Hall of Fame on April 25 at the Muse Center at Hinds’ Rankin Campus. 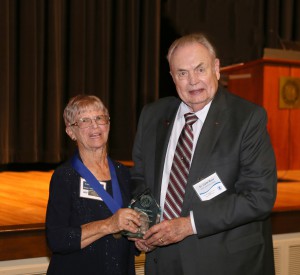 She attended Clinton High School from 1951 to 1955 where she lettered in three sports — basketball, tennis and track — and was a member of the state championship track team and district championship tennis team. But it’s in basketball where she really excelled, scoring more than 3,000 points. During her senior year alone, she scored 1,050 points for a 29-point per game average.

She continued her career at the collegiate level at then-Hinds Junior College from 1955 to 1956, winning Most Athletic in fall 1956. White was a part of the 1956 state championship tennis team and lettered in basketball. She also played basketball at Mississippi College.

All told, White coached seven state championship teams in three different sports. Her career basketball coaching record was an astounding 373-101. While coaching tennis, she had 325 victories to only 26 defeats for a winning percentage of 93 percent. She also coached three undefeated state championship track teams.

White helped create the high school all-star girls basketball game in 1965 and introduced AAU girls’ basketball and track and field to Mississippi. White was named All-Star coach in three sports: tennis, basketball and softball. She retired from coaching in 2012 after 51 years.