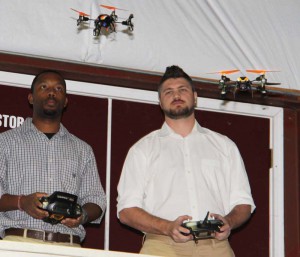 David Young of Jackson, left, and Brett Wheat of Clinton demonstrated their skills with UAV flying during the signing ceremony.

Hinds Community College and Pearl River Community College in Poplarville are partnering with the Camp Shelby Joint Forces Training Center outside Hattiesburg to offer an Unmanned Aircraft Systems program. Hinds will offer the Unmanned Aircraft Vehicle training while Pearl River, whose district encompasses the Camp Shelby area, will offer the academic classes for service members in the National Guard and Reserve as well as civilians to earn degrees.

Hinds signed the agreement with Camp Shelby on Monday, Jan. 27 in a ceremony at Hinds Community College’s John Bell Williams Airport where the college’s Aviation Department is based.

“What this partnership will do is allow us to expand our aviation program and it will allow military personnel fighting for our country to get college credit in the Unmanned Aircraft Systems program,” said Randy Pearcy, chairman of the Hinds Aviation Department.

“It’s very exciting from Hinds’ standpoint because we’ll be able to use their (Camp Shelby’s) restricted air space to do various training with our students operating platforms, research and development. On the flip side, we’ll be giving academic and technical credit to Guard and Reserve personnel as well as the civilian population.”

He said military personnel will be able to get credit for some work they have already and can take academic work they need through Pearl River Community College. Hinds is providing the UAS training. Pearcy said the program should be up and running no later than fall 2014.

“A degree in this field will be very much sought after in the future,” said Hinds President Dr. Clyde Muse. “It is one Mississippi needs and, I’m sure, this country needs.”

Col. Brad Smith, Commander of the Camp Shelby Joint Forces Training Center, said with the military withdrawal from locations around the world, Camp Shelby’s deployment mission is coming to a close.

“We are trying to rebrand, if you will, and exploit the capabilities that we have. What Camp Shelby has that is unique is 252 square kilometers of special use air space. That provides an opportunity for Hinds partnering with Pearl River to utilize that air space for research and development and training of pilots and all for the things that we do in the military,” Smith said. “The partnership was perfect. It makes sense. We believe the future for Camp Shelby is Unmanned Aerial Systems as well as cyber security. Those are the things we’re marketing on the civilian side of Camp Shelby.”

Dr. Scott Alsobrooks, vice president for Economic and Community Development at Pearl River, said the partnership is an example of the excellent working relationship the state’s community colleges have. “We have a solid system, a sound system, of community colleges in Mississippi that are willing to work together and get the most out of Mississippi’s tax dollar that are going into our community.”

Dennis Lott, the program’s instructor, said the program will “empower the youth of our country and this state that we live in to go into this brave new frontier.”

“We are in the process of building out the next golden era of aviation. This is the new era of aviation. It doesn’t mean we’re going to stop flying manned aircraft but the majority of our aircraft, in the future, will be unmanned,” Lott said.