Recycling aluminum cans and plastic bottles remained a commitment during the Fall semester, thanks to a grant from Keep America Beautiful and the Coca-Cola Foundation. Interior common areas on Hinds’…
By: Danny Barrett Jr.

Recycling aluminum cans and plastic bottles remained a commitment during the Fall semester, thanks to a grant from Keep America Beautiful and the Coca-Cola Foundation.

Interior common areas on Hinds’ six campuses feature 32 large recycling bins where cans and bottles can be disposed of and be recycled. No money exchanged hands, but the grant covered the donation of the bins to the Hinds’ Office of Sustainability. 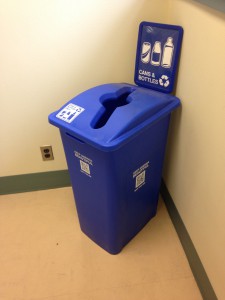 One of 32 recycling bins at Hinds’ six campuses made possible by grant funds from Keep America Beautiful and the Coca-Cola Foundation.

“Due to the high cost of recycling bins we have historically been very limited on the amount of recycling bins placed throughout the district,” said Jason Pope, director of the Office of Sustainability. “This grant allows us to place 32 high quality bins in dorms, academic buildings, and other high traffic volume areas.”

More than 66 percent of the bins are designed specifically for permanent, ongoing use in public spaces such as athletic fields, K-12 schools, fairs and festivals, special events and park settings, with the remaining 44 percent to be used by students in college residence hall settings.

“The reality is there are not many grants that provide recycling bins for college campuses,” Pope said. “This program is one of the few that do and that results in fierce competition from colleges and universities across the nation. I am proud to say that HCC operates one of the top higher education recycling programs in the U.S.”

Beginning in 2008, Hinds embarked on a campaign to reduce energy consumption throughout the district. That campaign now includes recycling, which began when Phi Theta Kappa students made recycling a service project.

The Office of Sustainability grew out of the original energy savings program and was created in 2013.